Vive Le Rock On 2 Tone--"Then and Now: How the 2 Tone Spirit Lives On" 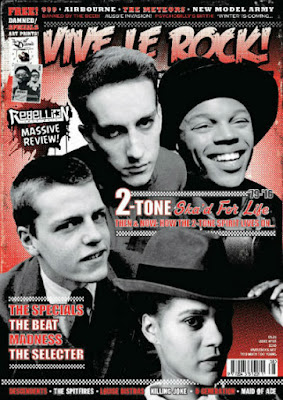 The cover of issue #38 of Vive Le Rock is devoted to 2 Tone ("Ska'd For Life--Then and Now: How the 2 Tone Spirit Lives On") and the magazine features some terrific interviews with Horace Panter and Neville Staple of The Specials (done separately), Ranking Roger of The Beat (where he talks about his upcoming new Beat album, as well as recording a version of "Rock the Casbah" back in the day with The Clash--the bootleg of which I wrote about here), and Pauline Black of The Selecter, and Rhoda Dakar of The Bodysnatchers. There's also a reprint of Gary Bushell's 1979 piece on Madness from his "Dance Craze: The 2 Tone Story," which is definitely worth reading again.

Here are some choice quotes from each interview:

Horace Panter: [Question: "What is your abiding memory of John Bradbury?"] "I don't think Brad's death has sunk in. I don't think it will until we're all in a room together with our instruments. It is the music that binds us together. My snapshot memory of Brad will probably be on stage (I forget where) and I'm shouting at him, telling him he's playing too fast. He glares at me, points with his drumsticks at the crowd and says 'Look'! The crowd, by this point in the show, were going mental. They wanted it too fast. That was Brad--he played for the audience."

Neville Staple: ["Question: "With yourself, The Beat, The Selecter, Bad Manners, The Specials and Madness all still touring and recording why do you think 2 Tone is still so popular?"] "Our lyrics are as relevant now as they were back then. There's rarely any other bands around dealing with the same grit and social awareness, today's lot are mostly busy twerking and getting their bits out! Plus, of course, you can't deny that awesome party beat that you get from old Jamaican ska and reggae riddims, mashed up with punky flavours. It really is a music of unity, stomping and chanting along."

Rhoda Dakar: [Question posed to both women: "Why do you think so few women were in 2 Tone bands before the Bodysnatchers?"] "People think punk had a lot more women involved, but that's simply because there were far more punk bands. There were only five or six 2 Tone-related bands. The seaside tour we did with The Specials and Go Gos though was different. The Go Gos had a female roadie and manager so both on and off stage it had a very different feel, It was nice to be on a tour where members of the bands, i.e.: the women, could get themselves together and be somewhere at the time they were supposed to!"

Pauline Black: "There had been several all-female punk bands. We regularly had The Mo-Dettes supporting us before The Bodysnatchers came on the scene. I remember being at a Bodysnatchers gig and Jerry Dammers was there too. The band had a wonderful, natural quality to them and it was suggested that they do a single on the 2 Tone label, which was recorded in Coventry at Horizon Studios. Women in bands were relatively rare whatever the genre of music back then, so I don't think that so few women was just a problem of 2 Tone. The original ska music scene had very few women involved too, but those that were in the vanguard in those days, like Millie Small and Doreen Shaffer in the Skatalites, were primarily seen as singers, rather than songwriters."

Ranking Roger: [Talking about the early days of The Beat.] "Things moved so quickly. We found Saxa three days before we went in to record the first single. Dave brought him into rehearsals and said listen to this guy he's brilliant. My first impression was, who's this noisy, very rude old man? But as soon as he played the first note that was it. When controlled, Saxa was a genius but he was unstoppable on stage. A song would finish and he'd carry on for another three minutes until he was ready to stop and the audiences would love it."