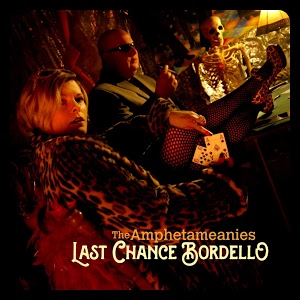 The Amphetameanies Last Chance Bordello (CD, F and J Records, 2014): This is a bit of an older release--but new to me!--that deserves your notice if you missed it a few years ago. On Last Chance Bordello, Scotland's wonderful Amphetameanies crank out some fantastic, revved-up modern ska (check out "Be Yourself" or "Good One Go") that is often hilarious (like the parody of America in "Tales of the Arizona Highway Patrol") or playfully absurd (see "Horses for Courses"--a British expression meaning that different people are suited to different things or situations--whose sole lyric is "Horses fuck horses!"). But you'll find terrifically strong and creative songwriting throughout, enhanced with inventive touches (the Trio-ish Casio keyboard percussion of "The Haunting," the calypso rhythm of "Leaving You," or how the melancholy, Madness-like small masterpiece "Took Some Time" shifts between major and minor chord progressions). Thank god for lyric sheets--I thought a line in "House On A Hill" was, "the Commies are coming," like it was a throwback to the Cold War 80s, instead of "The cockney's are coming," which is really a song imagining the exodus of crude city-dwellers to higher ground after cities like London flood with the rising waters from global climate change. Closing out the album is the bittersweet "No Fun Tomorrow"--an "Enjoy Yourself" for the new millennium, as we collectively descend into our Orwellian, dystopian future. 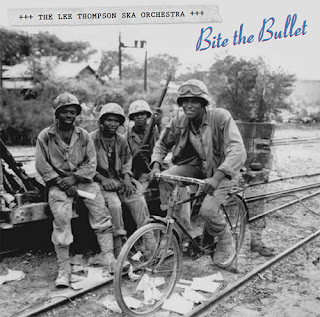 The Lee Thompson Ska Orchestra Bite the Bullet (CD/LP, Axe Attack Recordings, 2016): This is the excellent second album from Madness' saxophonist Lee Thompson and his top-notch compatriots, including Madness' bassist Mark "Bedders" Bedford (read The Duff Guide to Ska review of The Lee Thompson Ska Orchestra's debut album, The Benevolence of Sister Mary Ignatius here), and like its predecessor is filled with a delightful mix of Jamaican jazzy ska originals (by various members of the band), which blend quite well with a choice selection of 1960s-era US/UK/JA pop music songs. Both sides start with great spaghetti Western reggae cuts, Bedford's "Bite the Bullet" and trombonist Bob Dowell's "Western Standard Time." And there are a load of what you would swear are old Jamaican cuts--but you'd be wrong--like "Feel A Little Better" (track 3 on side A, not 2), "I Am King" (which is track 2 on side B, not 3), "Step It Up Sister" (track 4 on B, not 2), and the sinister "Wickerman." Actual covers include the deadly cool funky soul instrumental "30-60-90" written and recorded by Willie Mitchell in 1968 (on the LP, this is listed as track 3, but it's really the second song on side A); the Southern soul ballad "Cry to Me" written by Bert Berns (Russell) and first recorded by Solomon Burke in 1962 (and later by The Pretty Things and The Rolling Stones); a completely winning Madness sounding version of "I'll Be Back," a John Lennon-penned Beatles deep cut on the A Hard Day's Night soundtrack, but not used in the film--I prefer it to the original; a Skatalites-like arrangement of The Coasters' 1965 B side "Hongry" written by Jerry Leiber and Mike Stoller with great, expressive vocals by Thompson; John Barry's theme to the Bond film "On Her Majesty's Secret Service" (which is track 3 on side B, not track 4); and Lloyd Robinson's and Harry J's 1968 often versioned riddim "Cuss Cuss." This record's really good--don't let it pass you by (and nice that the album was dedicated to the late DJ Derek!).