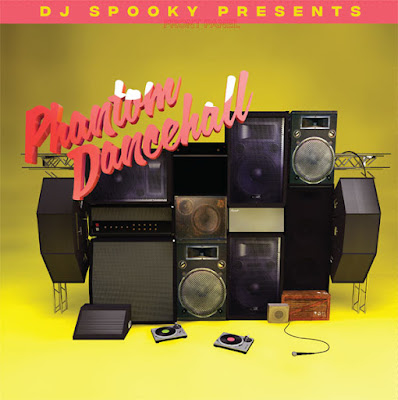 I was really intrigued by this 2018 Record Store Day release after having reviewed (and loving!) DJ Spooky's Creation Rebel--his stellar 2008 CD of re-mixes and mash-ups of classic tracks from Trojan's vaults by Lee “Scratch” Perry, Augustus Pablo, Bob Marley, Tapper Zukie, Wayne Smith, Dawn Penn, and more (read The Duff Guide to Ska Review of Creation Rebel; by the way, this absolutely deserves to be issued on vinyl someday). This time out, DJ Spooky (AKA Paul Miller) is working with material from VP Records and legendary UK label Greensleeves (now owned by VP), and with collaborator Apple Juice Kid (Stephen Levitin) has created an album of both original electro-dancehall (see their epic "Enter the Arena"!) as well as early '80s-sounding dancehall tracks that build upon snippets or larger elements of productions by Henry “Junjo” Lawes, Linval Thompson, Lloyd “Prince Jammy” James, and others to form something radically new (and oftentimes spectacular).

The cuts on side A skew toward modern dancehall, including "Hot Gal," which samples Busy Signal's "Da Style Deh"--there's a telephone busy signal sound in the mix, naturally; "Why I Come" makes good use of Lady Saw's "Walk Out" for a full-on club track; and Miller's and Levity's terrific "Dash It in the Mirror" might remind one of a stripped down Massive Attack-like take on dancehall. I'll cop to being partial to the early dancehall-ish tracks on the remainder of the album, such as the wonderfully heavy "No Return," which versions the Ranking Joe and Jah Screw written/produced "Country Gal Dub" from 1981's King Tubby Meets Roots Radics' Dangerous Dub; the menacing, yet fantastically majestic "Phantom in The Dancehall" (which I think incorporates Eek-A-Mouse's "Sensee Party" as part of its foundation); the mellow keyboard line from Eek-A-Mouse's "Ganja Smuggling" floats over a busy rhythm track on "Showtime (Dynamite Selection)"; and "Music of the Time" utilizes Prince Jammy's "Auto Rhythm" from Computerized Dub and is just this shy of being a digital ska cut. The album finishes with the magnificent "Jah Dub," whose distinctive and dramatic piano riff comes from Black Uhuru's cover of Bob Marley's "Natural Mystic." At first, many of the tracks on Phantom Dancehall might seem pretty uncomplicated, but this is a very smart, inventive, and well-crafted album that gains strength and depth with repeated listens. (And you can definitely dance to it!)