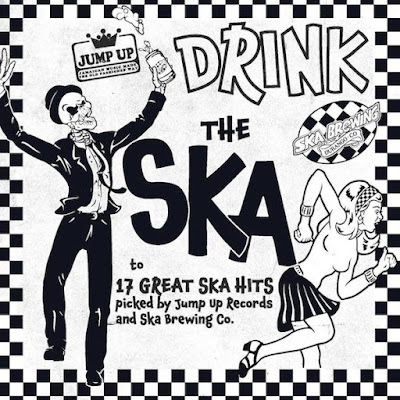 The loose concept for this unofficial 2018 RSD compilation was born at a Ska Brewing anniversary party in 2017 that featured Jump Up's Chuck Wren on the decks. Wren suggested that he and one of Ska Brewing's co-founders Dave Thibodeau put together a compilation featuring acts who have played Ska Brewing parties in the past, as well a healthy selection of choice bands from Jump Up's current roster. The result--unsurprisingly--is a really great mix of new, lesser-known, and solidly established ska bands from across the USA (many from the heartland) playing a variety of ska styles to please every taste.

The lead-off track is The Toasters' stellar tribute to Motown, "House of Soul (Whirly Gig Mix)," which, if you can believe it, is from 2013 (!) and represents the most recent bit of recorded music from them; surely another 45 must be forthcoming soon (read The Duff Guide to Ska review of the "House of Soul" 7" single here)! Of course, The Toasters have had a long association with Ska Brewing, which even released the limited-edition Sheebeen IPA Black in celebration of The Toasters' 30th anniversary. Top tracks to help you catch up on other well-known bands include Monty Neysmith and The Bishops' hilarious "Mama Don't Let Your Babies Grow Up To Be Skinheads" (from their Jump Up record Monty Neysmith Meets The Bishops, which we reviewed here); The Crombies' spot-on ska cover of Billy Bragg's heartbreaking "Levi Stubbs Tears" (from their Jump Up Dance Crazee LP, which we reviewed here); The Dendrites' awesome ska-jazz "Booty Lu's Canoe" (from their recent Jump Up album Damn Right); The Prizefighters' very Skatalites-sounding "The Accolade"; the Bandulus' righteous ska-soul-early rock cover of James Brown's "Good Lovin'"; Green Room Rocker's hot version of Montell Jordan's '90s New Jack Swing cut "This Is How We Do It" (from their Jump Up release Sweat Steady); the grooving reggae "Dogs" by 2 Tone Lizard Kings (with Alex Desert of Hepcat); and Chris Murray and Caps Lock's sweet acoustic ode to consent in "50 Shades of Okay."

Many of the newer/lesser-known bands on Drink the Ska are a revelation and you'll be thankful for the intro. Boss Riot's "Hearts and Hands" ("...they tend to wander") is a terrific, catchy 2 Tone cut with female vocals; Boomtown United's "Work It Out" reminds me of a lot of the excellent modern ska coming out of Europe in the early '90s; there's ska-punk from Buster's Ghost with "Horn Show"; Blue Hornets' "Boom Ska" is top-shelf vintage ska with Dick Dale guitar break; The Breachers' rocksteady-ish (and kind of melancholy) "Walking to the Train" is on a loop in my head; and The Fuss' lovely rocksteady cut "So Many Times" (more female vocals!) is a treat!

Ska fans from all over should be sure to check out this dynamite comp! (Wish I could say the same for Ska Brew's beers, as they're only in distribution in certain states--I'd love to be able to sample their products! Drink the Ska, indeed!).