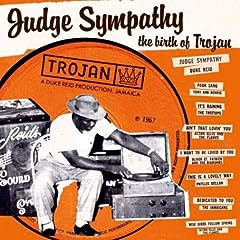 The obsessive collector in me is drooling over this new box set of 11 singles that is being issued in celebration of Trojan Records' 40th anniversary. The label was launched in 1967 as a subsidiary of Island Records specifically to release Duke Reid's productions in the UK (by the way, Trojan's name comes from the Trojan brand truck that was used by Duke Reid in Jamaica, which had Duke Reid--The Trojan King of Sounds painted on the sides). Indeed, since the Duke was one of the premier producers of the time, it follows that this box set documents some of the best rocksteady recordings ever to come out of JA--which up until now have been nearly impossible to find. Bust open the piggy bank for this one, kids.

The Judge Sympathy box set includes: "Judge Sympathy" by the Freedom Singers, "Never To Be Mine (O Solo Mio)" by Roland Alphonso & The Supersonics, "Folk Song" by Tony & Dennis, "Starry Night," "Comet Rocksteady (aka Tommy's Rocksteady)," "Zazuka," "Sir Don (aka Yeh! Yeh!)," and "Soul Rock" by Tommy McCook & The Supersonics, "It's Raining" and "The Sound Of Music" by the Three Tops, "Ain't That Loving You" and "Why Birds Follow Spring" by Alton Ellis, "I Want To Be Loved (I Need You)" and "Tulips From Heaven" by Boris Gardiner & The Diamonds, "This Is As Lovely Way To Spend An Evening," "Make Me Yours," "Leave It In The Hands Of Love (aka We Have Happiness)," and "Thing Of The Past" by Phyllis Dillon, "I'm A Loving Pauper" by Dobby Dobson, and "Dedicate My Song To You (aka Dedicated To You)" and "How Can I Unlove You (aka Things I Said To You)" by the Jamaicans.
Posted by Steve from Moon at 10:40 AM