Duff Review: Jimmy the Squirrel - Whatever the Weather 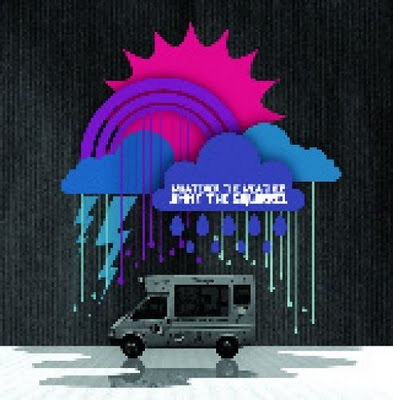 On Jimmy the Squirrel's great debut album Whatever the Weather, this Nottingham, UK act unleashes their distinctive brand of earnest and introspective guitars 'n' keyboard-based 2 Tone ska, which often views the world through a dark, pessimistic lens. It makes one wonder if the album title should be interpreted to mean that, despite the circumstances, they are determined or depressed no matter what. The strongest argument for the depressed viewpoint (in spite of the fact that musically it's the most upbeat, catchy, and danceable song on the record) comes in the form of the should-be-a-hit "Sort it Out." Even though the song's chorus urges the singer (Liam O'Kane) to get it together and "sort your life out," he obviously feels trapped in the situation: "I know it's true/but I don't know/if I have the strength to see it through."

The Jimmy the Squirrel worldview has people caught in systems of living and circumstances not of their making, as in "Boom and Bust," a furious assault on the greed and machinations of the men running Wall Street: "Boom and bust/the money's all gone/world-wide recession/the system's gone wrong/but please don't panic/'cause we're all in the same boat/and the people who put us here are keeping us afloat/but I don't know if I trust them--do you?" But the singer knows that the free-market-will-solve-all-society's-ills true believers lack the empathy (or decency) to give a damn about anyone else (indeed, if we're not well-off, we must have some sort of moral failing, since we can't pull ourselves up by the bootstraps): "Another family out on the street/Pay the mortgage or give the kids something to eat/And how do you make those choices? (I don’t know)/When the crunch comes I know which way I’d go." This is followed by the sparse and sarcastically mournful "Bankrupt Man," described as "Maggie Thatcher's biggest fan." He zealously subscribed to (and benefited from) her right-wing polices, but now he's the one unemployed in the cold, still dressing in a suit and tie to drink away the work-less afternoon hours in the pub. It's a schadenfreude-tinged "Ghost Town" for the business-suit class.

It may come as no surprise that romantic relationships are considered to be minefields, where misplaced trust in others (the bitter and almost over-the-top "Wings and Roundabouts") and mistaken perceptions or expectations ("A Little Less": "And when you finally left/Oh what sweet relief/No more false hopes or naive belief/That you loved me I knew it wasn't so") can end up ripping you in half. But peace can be found in the almost Morrissey-level melodrama of love and death in "How I Go": "If I die before I wake at least I know that I can take/The happiness of you lying in my arms keeping you safe from all evils and harms/If this is how I go I can die happy knowing that you know/I loved you ’til my end, I loved you ’til my end."

Our very troubled times are obviously reflected in Jimmy the Squirrel's lyrics, but if Rome's got to burn down around us, at least we've got some wickedly good music to dance to...

Duff Guide to Ska Grade: A-