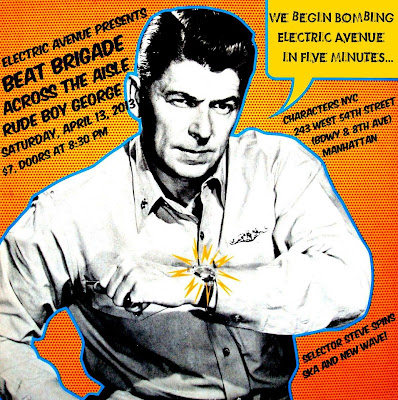 I have to admit that I find it kind of weird that I've joined my first band at this point in my life--I'm in my mid-forties, for Pete's sake! I've always been a late bloomer, but this is kind of ridiculous. Perhaps it's a sign of my stunted emotional growth (which is frozen somewhere in my twenties) or a manifestation of a mid-life crisis (with mortality creeping closer with every year). But anyone who's acquainted with me on a personal level knows that I've been a big music fan pretty much from day one.

In the first half of the 1970s, The Beatles and Monkees completely captivated me (The Beatles were always on WNEW FM and I had my treasured red and blue compilation LPs that I played on my parents' old portable/suitcase record player--I actually used it years later at the beginning and end of The Toasters' "2 Tone Army" music video that I shot; and The Monkees were in heavy syndication in the New York area and I would religiously tape their songs off the TV with my trusty mono Realistic/Radio Shack cassette tape recorder for playback later). In retrospective, my middle school years were a little bleak (um...gulp...Billy Joel, The Who, ELO, Yes--while most of my friends were into KISS and Aerosmith; I was actually in a professional boys choir/school at the time and it turns out that our headmaster turned down an opportunity for us to sing on one of KISS's records!), but then I discovered the first strains of New Wave through The B-52s, Devo, and The Ramones! And my high school years coincided with the incredible explosion of New Wave/post-punk in the UK (on the airwaves here on WLIR) in the first half of the 80s (fave bands included The Clash, Echo and the Bunnymen, New Order, and Simple Minds)--and this was also the time that I discovered 2 Tone, even though it was pretty much after the fact (though I was crazy about The English Beat's Special Beat Service and The Special AKA's In the Studio, both decidedly non-ska albums that came out during that period). At the end of high school/beginning of college, I had my first incredible encounters with American ska through Fishbone, The Untouchables, and The Toasters--and post-college was lucky enough to work for Moon Records for close to a decade (read about some of my adventures in ska in college and beyond here and here).

So, while I'm used to being a fan and working behind the scenes, this is new territory for me and I'm really thrilled and humbled to be a small part of a group that includes so many incredibly talented musicians.

Our band, Rude Boy George, does ska, rocksteady, and reggae covers of New Wave hits--and it consists of Megg Howe (Across the Aisle) and Roger Apollon, Jr. (Bigger Thomas) on lead vocals; Spencer Katzman (Bigger Thomas) on guitar; Dave Barry (The Toasters/Beat Brigade) on keyboards; Marc Wasserman (Bigger Thomas/Marco on the Bass) on bass; and Jim Cooper (Bigger Thomas) on drums. I sing back-up vocals and play a bit of melodica. Right now, our set list includes INXS's "Don't Change," Human League's "(Keep Feeling) Fascination," Soft Cell's "Tainted Love," Cyndi Lauper's "Witness," Squeeze's "Tempted," The Romantics' "Talking in Your Sleep," Billy Idol's "Eyes Without a Face," The Smiths' "Ask," and if we get it together, Culture Club's "Church of the Poison Mind." (Many more songs will be added to the mix in coming months!)

It probably should be mentioned that we're doing this out of our shared respect and love for the extraordinary amount of good music produced in the New Wave era (we're NOT doing cheesy, ironic covers). And we want to have some fun. That's our agenda/mission statement. Simple as that.

Rude Boy George's debut show is on Saturday, April 13, 2013 at Electric Avenue (at Characters NYC,  243 West 54th Street, between Eighth Avenue and Broadway in Manhattan--doors open at 8:30 pm). The bill also includes two of our favorite bands: Across the Aisle (ska/pop/punk) and Beat Brigade (1980s NYC ska)! The first 40 people in the door will be admitted for free, thanks to generous underwriting by Adam Liebling, who is celebrating his birthday at this gig! The Facebook event page for this show is here.

We all hope to see you there!

Email ThisBlogThis!Share to TwitterShare to FacebookShare to Pinterest
Labels: Across the Aisle, Beat Brigade, Electric Avenue, Fishbone, Moon Ska Records, Rude Boy George, The Clash, The English Beat, The Special AKA, The Specials, The Toasters, The Untouchables