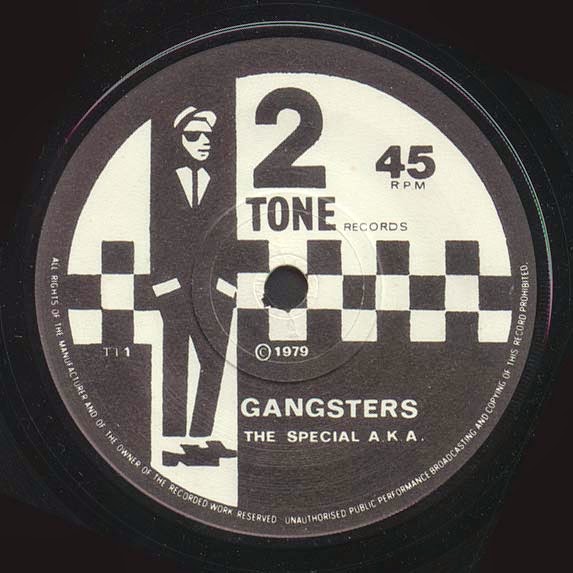 Last week, as I was re-reading sections of Paul "Willo" Williams' wonderful and definitive biography of The Specials, "You're Wondering Now: The Specials from Conception to Reunion," I came across a section detailing some of the rare versions of 2 Tone releases that the collector might want to try to track down. While I'm not a 2 Tone completist, whenever I stumble upon a 2 Tone release that I don't have, of course, I'll grab it (within the last few months at the same used record store, I found and bought copies of The Apollinaires' "The Feeling's Gone" and The Higsons' "Tear the Whole Thing Down" singles, both of which I'd never seen before, since they were never released in the US--and ended up ordering the 10" Special AKA "War Crimes" single via Discogs). But reading about the 2 Tone rarities in Willo's book rekindled my interest in them.

So, while I was looking at a Comsat Angels single on eBay, I checked out a few of the other New Wave-era singles that the seller was offering and found a near mint copy of one of the self-released/Rough Trade-distributed (and pre-Chrysalis) singles of The Specials' "Gangsters" b/w The Selecter's "The Selecter" (though without the stamped sleeve). Since it wasn't pricey (and I only had the US pressing of this single in my collection), I bid on it and won. When it arrived this week, I put it on my turntable and was surprised to find that A) the paper labels were reversed (so "The Selecter" track was on the side with the "Gangsters" label and vice versa), and B) this version of "Gangsters" fades out at the end!

I'm not sure how many of these are out there (they're not mentioned in Willo's book), but I'm thrilled to unexpectedly have a mislabeled version of "Gangsters" come into my collection!

Update (8/27/14): Paul Willo just got his hands on Jerry Dammers' test pressing of "Gangsters," which apparently has a different mix than the version of the song that was eventually released. I can't think of anyone else in the world who deserves to have that rarest of rare 2 Tone singles in his collection! Congrats, Willo!

Email ThisBlogThis!Share to TwitterShare to FacebookShare to Pinterest
Labels: 2 Tone, Paul Willo, The Apollinaires, The Higsons, The Selecter, The Specials