Editor's note: Tim Receveur, along with his wife April, are the organizers of the Supernova International Ska Festival, which will be taking place on May 26-27 at the 1781 Brewing Company in Spotsylvania, VA (see the entire bill below). We very much appreciate him taking the time so close to the event to answer our questions about the festival. Please note that Duff Guide to Ska readers can save $10 on a weekend pass to Supernova with the promo code "Duff."

The Duff Guide to Ska: How did last year's festival turn out? What were some of your personal highlights?

Tim Receveur: "The 2017 Supernova festival accomplished most of the goals that my wife April and I set out to accomplish. We wanted to put ska back on a larger stage and hopefully inspire people to think about it's past and future in a brighter light. On one end, we honored the legendary Derrick Morgan by hosting his 60th anniversary performance with Eastern Standard Time (who absolutely gave a performance of a lifetime), while at the same time mixing the weekend with a ton of young, up-and-coming ska bands who were barely alive when ska was big in the '90s. I didn't see much of the festival to be honest, but I did see The Aggrolites and The Pietasters backing Greg Lee of Hepcat on Night 1 and The Skints and The Pietasters on Night 2, which were all highlights for me. Adam Flymo Birch, who played trumpet for The Specials and The Toasters, also showed up for the weekend not knowing what to expect and he ended up playing on everyone's sets."

DGTS: Without getting too much into the nitty gritty, how are you financing this? Did you break even or turn a profit last year? (Will this always be more a labor of love or would you like seeing it develop into a bigger business venture?)

TR: "This has always been a labor of love and no one in their right mind would spend this amount of time on a festival if they didn't have a deep affinity for the community and the bands. Last year, we financed the festival through ticket sales, a percentage of the beer money, and a GoFundMe campaign, but it lost money unfortunately. This year, we're trying to do a better job of keeping our costs down and hoping that last year's success will lead to more tickets sales in 2018 (2018supernova.eventbrite.com)."

DGTS: What about putting on the Virginia Ska Festival a few years ago made you want to make the jump to a larger and more ambitious international ska fest?

TR: "Supernova was actually the third try at a name after a stupidly named Brew Fest in 2014 and the Virginia Ska Festival in 2015. The first year was just one day and five bands including The Pietasters, Chris Murray, and The Snails (now The Dull Blue Lights) and we expanded it to two days with the Virginia Ska Fest. The first band we signed in 2017 was The Skints from the UK, so it felt like we needed to think a little bigger about the festival name. NOVA is just shorthand for Northern Virginia, so the name is bigger while recognizing our roots in Virginia."

DGTS: What is your criteria for selecting acts each year?

TR: "We have a few that we try to target and lock down early each year. For 2018, I wanted The Suicide Machines, MU330, Western Standard Time and Hepcat, and we were able to lock down three of the four. We couldn't land Hepcat in the end, but Greg Lee is coming in and singing a set with WST this year. For the other bands, it's been a family effort and my son Brody has helped pick the bands, especially the newer bands. For criteria, we spent all summer listening to the tracks that bands sent, we want to have a geographic mix of bands and have some variety to the ska. We've also been coordinating closely with Chuck Wren from Jump Up Records and Matt Flood from Asbestos Records, who have both helped getting the bands and the word out."

DGTS: What's it like juggling your considerable responsibilities at the PeaceTech Lab with organizing a major music festival?

TR: "It's been extremely tough over the last few months. My work for PeaceTech Lab has had me on the road in four continents since December and I recently spent the better part of early 2018 in Niger, mostly without internet, which makes it hard to get the word out for the festival. The upside is that I run into ska fans in unexpected corners of the world."


DGTS: What do you think of the ska/punk/reggae "Back to the Beach" festival out in California (and why do think ska festivals out there attract big music industry promoters, while there's not much interest back East)?

TR: The Back to the Beach festival looks like a dream come true and most of my all-time favorite bands are there. When I first saw the bill, I definitely thought it was fake. California is definitely the epicenter of the bands and the promoters, so it makes sense that it would be bigger out there. For selfish reasons, I'm just glad this wasn't announced in New York or Florida or we would be sunk with it so close to Supernova. We obviously don't do ourselves any favors by hosting this in Virginia and we've had offers to move this to New York or Boston, so we'll see how this year goes and explore that in the future."

DGTS: It seems like most of the major scenes from across the US are represented by bands on this year's festival bill--but it's still challenging upping the quotient of international acts, right (what with travel expenses, visas, etc.)? Do you see including a higher number of international acts in the future? 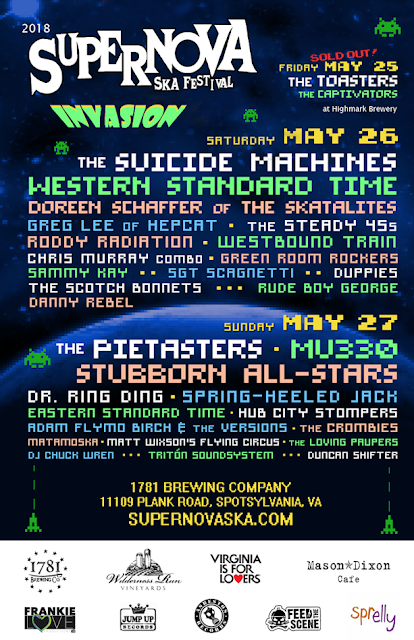 TR: "The downside to international acts is exactly what you mentioned. You can find affordable flights, but the visa issue is the hardest thing for independent performers. We tried to bring in Rhoda Dakar this year unsuccessfully because the visa process is absolutely daunting and even with a lawyer it takes months. A British citizen can come to the U.S. with no problem, but if they want to sing and get paid they need an O visa which is the same thing that Bono and Sting need to tour. We do have international acts coming with Doreen Schaffer from The Skatalites coming in to sing with Western Standard Time, Roddy Radiation from The Specials will be there backed by The Scotch Bonnets from Baltimore, and Dr Ring Ding will be coming in from Germany."

DGTS: Is there anything about this year's festival that you want to pass along to The Duff Guide to Ska readers?

TR: "We will be reuniting The Stubborn All-Stars with an absolutely killer line-up for this year's fest with King Django, Vic Ruggiero, Eddie Ocampo, Agent Jay Nugent, Sheldon Gregg aka Bassista Giamaicano, David Hillyard, and Rich Graiko. This will also be the first time on the East Coast for both Western Standard Time and the Chris Murray Combo.

Help us keep ska alive by buying your tickets and coming down to the festival! It will be held at a beautiful brewery called the 1781 Brewing Company and you can see some photos here (http://april.smugmug.com/1781). Get your tickets at http://2018supernova.eventbrite.com/ and save $10 on a weekend pass with the promo code "Duff." Our website can be found at http://www.supernovaska.com. Thanks!"