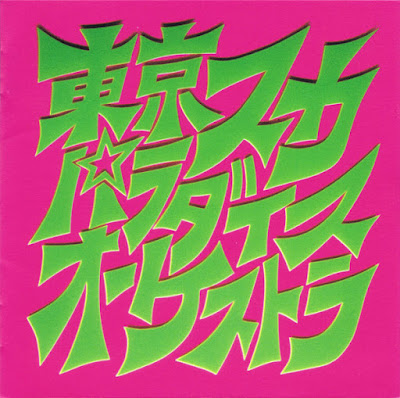 Late last year, Sony Japan reissued five of Tokyo Ska Paradise Orchestra's earliest releases on vinyl (their self-titled 1989 12" debut EP, Skapara's Intro, TSPO Live, World Famous, and Fantasia), all of which are now available as shockingly expensive imports in the US and Europe (anywhere from $55 to $70+). I had managed to pick up a few of these titles on CD back in the '90s at Tower Records on 4th Street and Broadway, but never saw any of them on vinyl (which was falling out of favor with the music industry and music fans then). So, when I saw that one very mainstream US record chain was offering them on enough of a sale that made their cost slightly less outrageous, I opted to buy their first full-length album, Skapara's Intro, which is an absolute ska classic (though I also really wanted to purchase their incredible 12" debut EP, but getting both was too much of a hit to my wallet). When Tokyo Ska Paradise Orchestra (TSPO, AKA Skapara) played Sony Hall here in Manhattan last October, I had hoped that they would be offering these reissues at their merch table, but no such luck.

Like their peers The Ska Flames, one of their main Japanese rivals at the time, Tokyo Ska Paradise Orchestra's brand of ska was very much in the mold of The Skatalites--1960s big band Jamaican ska played almost effortlessly by wonderfully gifted musicians--and many of the brilliant original tracks on Skapara's Intro are in this vein. But there's also this crackling undercurrent running through the album that hints at at the band's explosive power and their willingness to push the boundaries of this genre in all directions (see "Monster Rock" and "Kimi To Boku"), something that would become much more evident on subsequent albums.

The majority of Skapara's Intro consists of boss ska instrumentals like the the bright and chipper "Strange Bird," "Vampire" (a cinematic track that evokes a Bela Lugosi character both debonaire and deadly), "Monster Rock" (earth-shaking Dick Dale surf-ska meets Godzilla--and their first hit in Japan), "Kozou No Kousin" (a very funky take on Henry Mancini's "Baby Elephant Walk"--it seemed like every ska band was covering this at the time, including Bad Manners and Napoleon Solo), the Far East-sounding "Uuhan No Onna," "Golden Tiger," the ebullient and increasingly manic "Dokidoki Time" (which I believe translates as "Pounding Time"), and the straight-up jazz track "Getsumen Butou." The only songs with vocals (sung mostly in Japanese) are their white hot version of Percy Mayfield's "Hit the Road Jack" (that incorporates a bit of the "Star Wars" theme during the keyboard solo) and "Nigai Namida" ("Bitter Tears"), a highly melodramatic, slightly Western reggae-ish cut (the use of the string section is amazing here). The album ends with the odd but kind of extraordinary "Kimi To Boku" ("You and I"), a very French sounding track (like something out of a Charles Boyer film) that features a band member whistling the melancholy melody, purposely out of key at times, accompanied only by an accordion.

Tokyo Ska Paradise Orchestra has covered a lot of ground in the three decades since releasing Skapara's Intro (they're up to 22 studio records, five live albums, and a host of singles and EPs), but this album (and their debut EP that just preceded it) showed that they had it all in place from the very start. Without a doubt, TSPO's Skapara's Intro was one of the finest albums released during the late '80s/early '90s global ska scene--and is certainly a recording of great significance and importance in the ever-evolving history of ska music.