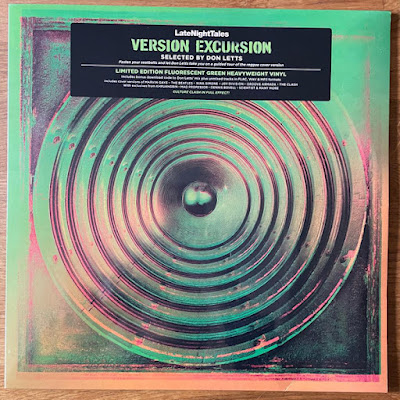 For the uninitiated, Late Night Tales is a long-running series of compilations, each selected by a musician with the goal of creating what they consider to be their ultimate, mood-setting "late night mix." The latest release is Don Letts' mighty and marvelous Version Excursion (Heavyweight double LP, LateNightTales, 2021), which reflects his omnivorous musical tastes: '60s rock, Black American R&B and soul, punk and post-punk, and--of course--Jamaican and British reggae and dub. This is expressed through Letts' selection of dub covers (many of them exclusive remixes personally solicited by Letts) of songs by Aaron Neville, Jefferson Airplane, The Clash, Joy Division, Stevie Wonder, The Beach Boys, Lou Rawls, Marvin Gaye, Kool & The Gang, Bill Withers, Althea and Donna, Randy Newman, Merle Travis, The Bee Gees, War, The Beatles, and others.

Letts, the British-born son of Windrush generation Jamaican immigrants to the UK, grew up straddling the divide of white and Black music and culture--and during the advent of the mid-'70s punk scene, he was hired as the in-house DJ at London's infamous Roxy club (punk's ground zero), where he effectively introduced/turned on the British punk scene to reggae and dub in between sets by The Clash, Damned, Buzzcocks, Slits, Generation X, etc. (since so few punk records existed at the outset of his two-year DJ residency there in early 1977, he spun a lot of reggae!). Letts went on to film all of The Clash's music videos (as well as others for The Psychedelic Furs, Musical Youth, The Pretenders, The Undertones, Fun Boy Three, Eddy Grant,  Elvis Costello & The Attractions, Public Image Ltd., Bob Marley & The Wailers, and more); co-found Big Audio Dynamite (read my review of their reunion show in NYC in 2011) with The Clash's Mick Jones (he made BAD's music videos, too); direct many music documentaries, including The Clash: Westway to the World (which won him a Grammy), Soul Britannia, and The Story of Skinhead; and work as a DJ on BBC's Radio 6. Also his 2008 book Culture Clash, Dread Meets Punk Rockers is essential reading (and he has a new one out, too).

Many of the cuts Letts spotlights on Version Excursion are phenomenal reimaginings of their source material (though a few are so deconstructed as to be rendered almost unrecognizable, unless you consult the track listing--see Wrongton Meets The Rockers "Dub in the Supermarket" and Black Box Recorder's "Uptown Top Ranking"). Stand out tracks abound. Prince Fatty & Shniece McMenamin's "Black Rabbit" (their take on Jefferson Airplane's "White Rabbit," which I previously reviewed here) is an alluringly menacing dubby trip, while Zoe Devlin Love featuring (Dub Pistols') Tim Hutton's version of The Beach Boys' Pet Sounds track "Carolina No" is a gorgeous lover's rocker. The exclusive remix of Joy Division's "Love Will Tear Us Apart Again" by Capitol 1212 featuring Earl 16 is stellar and may even top their original (I reviewed that mix here). Cornell Campell's recasting of Marvin Gaye's "What's Going On" as "Ital City Dub" is mind-blowingly good, as is Dennis Bovell's new remix of his old band Matumbi's "(Can't Get Enough of) That Reggae Stuff," which is their read of Kool & The Gang's awesome "Funky Stuff."

According to Letts' track-by-track liner notes, The Clash used to warm-up in rehearsals to Ernie Ford's "16 Tons," which is given an incredibly dread spaghetti Western reggae dub by French act OBF. Japanese producer Yasushi Ide enlisted U-Roy for a wonderfully melancholy cover of Bill Withers' "Ain't No Sunshine" (love all those strings!). The Tamlins' read of Randy Newman's "Baltimore" (an indictment of everything that contributed to the decline of Black urban cities in the late '70s) is blistering. At one point in his teens, Letts had amassed an enormous collection of Beatles memorabilia, but once punk struck (The Clash: "No Elvis, Beatles, or Rolling Stones") he exchanged it all for a car (which he eventually got rid off, since the coppers kept pulling him over for Driving While Black). Having said all that, he never lost his love for the Fab Four and has included the Easy Star All-Stars featuring Matisyahu's wild dub of George Harrison's "Within You Without You."

The track that I keep coming back to here most is Gaudi Meets The Rebel Dread featuring Emily Capell's superb version of Big Audio Dynamite's "E = MC Squared" (which Letts co-wrote with Mick Jones). Part of it's nostalgia (it's a key cut from the soundtrack of late teens), but this mellow reworking is just perfect (the repeated descending piano riff toward the end of song is brilliant!).
+ + + +
Posted by Steve from Moon at 4:35 PM