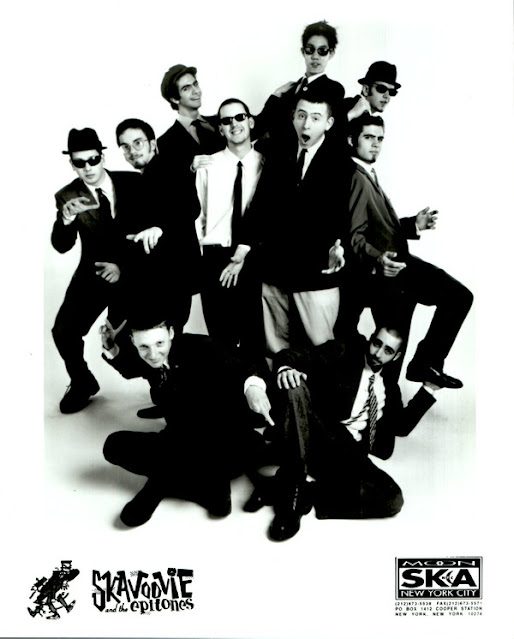 But the big news is that on September 14 Skavoovie & The Epitones are re-issuing their brilliant 1995 debut album Fat Footin' in the digital realm (Bandcamp, Apple Music, Spotify) and are including two bonus tracks: a cover of The Skatalites classic “Beardman Ska” and an alternate version of their track “Riverboat" (both of which I think are from their 1996 Moon vinyl single).

Then in January 2023, they're releasing their sublime sophomore album Ripe (with bonus tracks), followed later in the year by a brand new compilation of live and rare cuts. And that's not all--there are plans in the works to press a 7" vinyl single featuring an unreleased live version of "Nut Monkey" b/w "9 Dragons." "Nut Monkey" cemented my love of Skavoovie & The Epitones--back in the day I was thrilled to feature this song on the first Skarmageddon comp I produced in 1994.

If you didn't know Skavoovie & The Epitones then, you need to know them now.

Email ThisBlogThis!Share to TwitterShare to FacebookShare to Pinterest
Labels: Hell of a Hat, Ken Partridge, Moon Ska Records, Skarmageddon, Skavoovie and the Epitones, The Skatalites