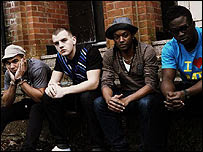 Kid British describe themselves as "a gooey mixture of The Specials, Outkast, Madness, De La Soul, Gorillaz, The Streets, and Blur." (Hey, I like all of these bands, tell me more!) Take a listen to three of their tunes, "Elizabeth," "Sunny Days," and "Rum Boy," on the Kid British MySpace page and see what you think.

Most obviously, there is a heavy Madness and Specials-as-channeled-through-Damon Albarn/Blur influence, which I personally dig. Ska on the pop tip (yes, "Sunny Days" does remind one of ELO's "Mr. Blue Sky," a song I'll be bold enough to admit liking)--it crawls into your head and lives there happily for a while. Kid British is definitely something worthwhile to listen to--in its own right and while you wait for Madness' new album, The Liberty of Norton Folgate, which is supposed to come out exactly when? (While we wait impatiently, Suggs has apparently been filming a travelogue about Italy for British TV: Suggs's Italian Job.)

I hate the whole "next big thing" crap hype (hey, it helped kill US ska and Moon Records at the end of the 90s..once bitten, right?), but these guys sound like they might be able to deliver on their promise. Their first single is going to be released on October 27th in the UK on Another Music=Another Kitchen Records (don't miss the Buzzcocks reference there, folks) and distributed by Mercury/Universal. I don't know if this will be available as an import in the US, but perhaps we can buy it on iTunes? Their album is slated for release in spring 2009.

Read a bit more about the band in these articles from the Guardian and the BBC.
Posted by Steve from Moon at 10:09 PM