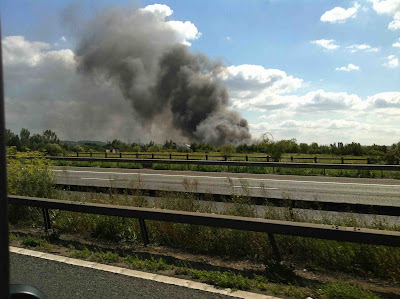 It's never good sign when music or books are burned or banned by a government or mob of citizens, whether as a means of censorship (purging libraries of supposedly communist books during the Cold War 1950s), an act of cultural or political oppression (think of the Nazis burning thousands of "un-German" books, many by Jewish authors, in a twisted effort to "cleanse" their culture of anything that wasn't in line with their hideous ideology), or a quasi-racist "entertainment" stunt (see Disco Demolition Night). It's a societal barometer warning to anyone paying attention that things have gone completely rotten.

While the politicians and pundits brawl over assigning blame on the recent UK riots/social unrest (I happen to believe that it had a lot to do with Cameron's deep cuts to the social safety net--but other complicated and seemingly contradictory factors were in play, too), there is no denying that the extraordinary fury unleashed was the result of something terrible affecting major and disparate portions of British society.

Bucket of The Toasters happened to take the photo above of the smoke pouring out of the SONY warehouse in Enfield, North London from his tour van--he said it all reminded him of the Brixton and Toxteth riots in '78 and '79 and that its roots were the same: "conservative 'austerity' cuts on everything from benefits to youth centres and all social services on top of massive unemployment and deprivation on an epic scale; those kids have nothing to hold on to and all the pols can do is draft in more cops; no effort whatsoever to tackle the underlying problems of chronic unemployment, grinding poverty and alienation."

The burning of the SONY warehouse that contained over 3 million CDs and LPs from 150+ independent labels that were distributed by PIAS Group--reggae re-issue label Soul Jazz Records among them--was an event that stood out in stark contrast as it didn't seem like a re-run of the pitched running riots from the "Ghost Town" Thatcher years (and is probably why the SONY warehouse arson received an extraordinary amount of press coverage). Did one of the rioters see the SONY sign and think they were striking a blow against the corporate overlords or did they simply like to torch things? Was this the pop-culture equivalent of the local stores that the rioters looted and burned in their own neighborhoods? Was it just another expression of the pent-up No Future hopelessness, frustration, and ultimately self-destructive rage that consumes absolutely everything in its path? (Days later, The New York Times reported that three teens were arrested in connection with the fire, though no motive was reported in the Times or any other article I found on the web.)

This particular act of arson seemed particularly shocking and nihilistic to the ska musicians and fans that I'm connected with on Facebook. For so many of us, music gives our lives joy, meaning, purpose--even a way for some to eke out a living. (Songs, even whole albums, become life-long "friends," as King Hammond puts it in "Dave and Ansel.") Sure, maybe one could kind of understand looting a music depot in order to augment one's collection or to sell the CDs on the corner or through eBay. That would at least acknowledge that the music had value and significance. But the music meant nothing to the rioters. Everything was completely destroyed. To what end?

That's what's most disturbing about it all. Why?

I don't think the kids that torched the Sony distro centre had any idea of what was actually in there. But it is true to say that there is a tremendous level of nihilism in the UK amongst kids who really don't have a future. Youth unemployment levels are at a shocking high, massive cuts to the education budget will leave almost 100,000 English kids without university places (Wales and Scotland take way more care of their students)and on top of all that the public's nose was ribbed in the s*** by the uber-publicized royal wedding which was funded by tax payers to the tune of 25 million GBP. go figure

Thanks for your comments, Buck. Wild to contrast all of the millions spent on a royal wedding while social services are cut to the most vulnerable members of society. Same old story there (and here): the rich get theirs and everyone else is screwed...

Walter Sobchak: Nihilists! Fuck me. I mean, say what you like about the tenets of National Socialism, Dude, at least it's an ethos.

I think this is the appropriate occasion to post this Steve...