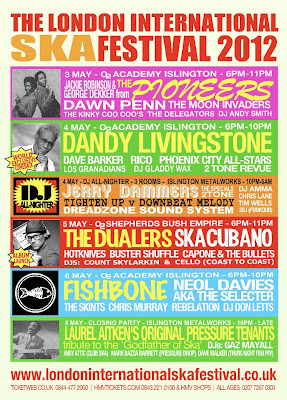 Click on the image at right to find out which bands/DJs are playing where and when; tickets may be purchased here.

If London is anywhere near you, make sure to be a part of this incredibly unique and mind-blowing ska experience! And if you have the extra scratch and time to fly in from points much further afield, what are you waiting for--book your flight!

Breaking news from the festival concerns the two limited edition 7" vinyl singles being released in conjunction with this year's LISF. They are four fantastic new cuts by classic and contemporary artists, including a superb new track from one of 2 Tone's greatest musicians and songwriters--the man who wrote "On My Radio," "Missing Words," "3 Minute Hero," "Celebrate The Bullet" and more--Mr. Neol Davies. More details to come soon!

I am still waiting on my pre-ordered concert album from last years LISF. It was a great show, but wish they would follow through on their commitments.