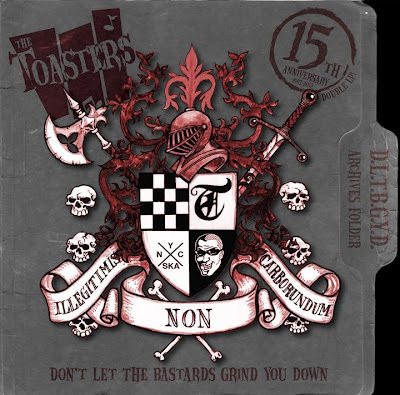 Dates have just been announced for The Toasters' first ever (yes, first ever!) tour of Australia coming up in September (dates below). It's hard to believe, but the band has never been Down Under in all of its years roaming the world. Word has it that The Toasters will go on to play in several countries in Asia after their Aussie adventure. Stay tuned for more details on that.

In other Toasters news, the 3rd Wave Ska Preservation Society Reissue Project, Round 2 (put together by Asbestos Records and Underground Communique Records) has a Kickstarter project that includes the pressing of an expanded (i.e., bonus and remixed tracks), double-LP reissue of The Toasters "Don't Let the Bastards Grind You Down" (read a review of the album from back in the day here). If you're interested in supporting this record (and 90s releases from Edna's Goldfish, The Slackers, and the Bruce Lee Band), go here.

The Toasters Tour of Australia, September 2012

Friday, 14th September – The Palais, Daylesford
with The Resignators
Tickets available from www.oztix.com.au

Thursday, 20th September – The Cambridge, Newcastle
with The Resignators & The AuSkas
Tickets available from www.moshtix.com.au

Friday, 21st September – The Annandale, Sydney
with The Resignators & The AuSkas
Tickets available from the www.annandalehotel.com

Poor Aussies only get to see the Toasters that are at best a shell of the greatness they were.