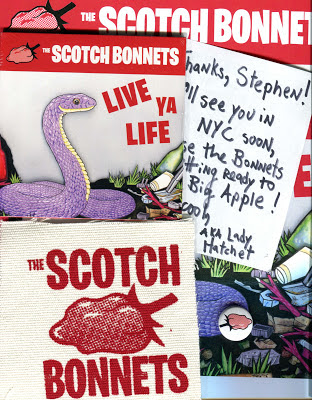 Over the weekend, the postman (remember those nice men and women that bring letters and packages to your home that some people want to put out of business?) delivered a manila envelope of goodies to me from Baltimore's top ska/rocksteady/soul act The Scotch Bonnets. You see, last summer, I had supported the band's Kickstarter campaign and it's now time for me (and all of their other backers) to enjoy the fruits of our collective investment in the group: their new, debut Live Ya Life CD, a patch, a badge, a poster, and a nice thank you note from Lady Hatchet, to boot!

The deal is that 65 of us had some faith in the band, put up a little bit of cash, and all of us now have a terrific album to enjoy and/or some cool merch--and in the process, The Scotch Bonnets debut album can now be sold at shows, so they can earn a bit more money to keep themselves going and making the music we love. Plus the album helps spread the word about the band--and can help lead them to even bigger and better things.

A good way to think about all of these ska crowd funding projects (apart from our selfish motives--namely that we get a CD or vinyl or merch out of it all!) is that they help give bands a leg up. In a way, we the fans are replacing all of those pre-filesharing indie labels that would take big risks on new and unknown bands by fronting the cash to put out their albums; and instead seeing monetary profits that might come if a band takes off, our reward is that we're helping these bands to continue to be in position to keep on creating the music we love (and since making music is--in most instances--a money-losing enterprise, we have to do what we can to support their labor of musical love, too).

I'm happy to report that I'll be receiving a few more crowd funding-related packages down the line. The  following projects have reached their funding goals, but there are still a few days left to get in on the action...

Hot on the heels of Sammy Kay's debut EP (read The Duff Guide to Ska review here), comes this project to fund his new 15-track album of bluesy, soulful, rocksteady and ska cuts titled Love Letters. Levels of support range from $8 for digital copies of Love Letters and his recently released EP, to $12 for the CD or $15 for black wax, to $30 for both CD and colored vinyl of the album (plus stickers and pins), and higher. Pledge your support here.

Urban Pirate Records is hoping to put out a series of split singles from some of the finest ska and early reggae artists playing out right now on the US scene.  What's cool is that you can order singles a la carte (for $7 each) or go for the whole enchilada ($30 for all five singles); higher amounts score you test pressings and other goodies. Pledge your support here.

To date, the Urban Pirate Booty Split single series has raised a little over the $5k needed to fund this project, with 4 more days left.