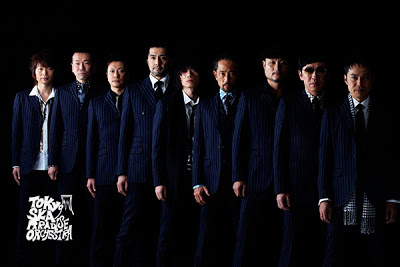 If you live anywhere near the NYC metro area and want a chance to win tickets to see the mind-blowing Tokyo Ska Paradise Orchestra at Stage 48 in Manhattan on Sunday, April 28, 2013--then we have the contest for you!

Thanks to the Tokyo Ska Paradise Orchestra and the good folks at Stage 48 and The Press House, The Duff Guide to Ska has 10 pairs of tickets to give away through our Skapara contest!

For a chance to win a pair of tickets, here is what you need to do:

Ten winners will be selected at random--and will be notified by me via email on Saturday, April 20, 2013.

Good luck to all contest entrants!

Here is the skinny on the TSPO show:

If you're not familiar with the TPSO, here's a great bio of the band from AllMusic.com:


"I'd make time for Tokyo Ska Paradise Orchestra anytime," said no less an authority than the band's one-time producer, veteran reggae guitarist Dennis Bovell. Starting out in the late '80s as a ska revival group playing the streets and clubs of their hometown, the sharply suited Tokyo Ska Paradise Orchestra quickly became the flag-bearers for the Japanese ska scene. This movement gained popularity in the 1990s and included the arguably more "authentic" ska sounds of the Ska Flames (signed to Gaz Mayall's label in the U.K.) and the Determinations from Osaka. Like those two acts, Tokyo Ska Paradise Orchestra's sound is largely instrumental, with powerful, punchy arrangements that re-create the jump-up energy of Jamaican ska originals such as the Skatalites. It's a sound as vibrant as any modern-day ska -- anywhere.

Over the course of more than 1,000 live shows, the band has forged a live reputation that has seen it invited to perform at England's Glastonbury Festival and France's Eurockeennes. Redefining their sound over the course of more than ten albums (including the occasional European release), the deaths of two bandmembers, and the departure of their bandleader, Asa-Chang, the ten-man-strong Tokyo Ska Paradise Orchestra have also recorded with some of the biggest names in Japanese music, including Shiina Ringo, Puffy AmiYumi, and Thee Michelle Gun Elephant's Yusuke Chiba. They've also played at different times with singer Neville Staples and trombonist Rico Rodriguez, both former members of the Specials.

Formed in 1985 by percussionist Asa-Chang, Tokyo Ska Paradise Orchestra quickly gained popularity. Within two years of their debut release -- an eponymous 12" single released in 1989 -- and only a year after their debut album, Ska Para Toujou, dropped, the group emerged from Tokyo's underground scene to play Japan's most prestigious venue, the Budokan in Tokyo, to a crowd of 10,000. By 1993 Asa-Chang departed, which led to a reassessment of the band's working methods, but ultimately ensured Ska Para's longevity. From now on, all members would take a role in arrangement and production. The change was also necessitated by the death of the band's flamboyant frontman, Cleanhead Gimura, in 1995. Original drummer Tatsuyuki Aoki died in 1999. Despite the upheavals, Ska Para released arguably their best album, Full-Tension Beaters, in 2000, on the Avex label. The album became the group's debut European release and a tour there soon followed, in which the band raced through 11 shows in 12 days.

In between the 2002 release of the number one album Stompin' on Downbeat Alley and High Numbers, the successor to Downbeat Alley released the following year, Ska Para played their biggest headlining show to date to 15,000 fans at Yokohama Arena. They would go on to play to many more thousands at the Glastonbury and Eurockeennes summer festivals. In 2004, they became the first Japanese act to play the Bonnaroo music festival, held in Manchester, TN, following this up with a North American tour and a third tour of Europe, including sold-out shows in Barcelona and Madrid and a performance at Denmark's Roskilde festival. As if it were needed, vindication for a career of spreading the ska gospel came in 2006 when Tokyo Ska Paradise Orchestra recorded with one-time Specials member Rico Rodriguez on the trombonist's Japan-only album Japa-Rico -- proof that it wasn't only Dennis Bovellwho was making time for Japan's favorite ska practitioners.

Oh yeah, this makes up for missing Razika last fall!