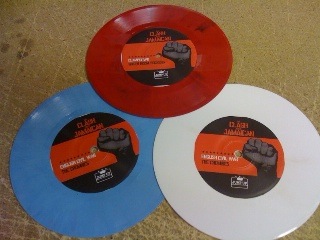 In all my many years as a ska fan, I have yet to meet a fellow ska disciple who isn't also a rabid fan of The Clash (probably my all-time favorite band). For many ska fanatics of my generation whose high school years fortuitously coincided with the late 70s and early 80s, The Clash were our formal introduction to--and gateway for exploring--roots reggae (just as the 2 Tone bands led many of us to seek out recordings by the original Jamaican ska musicians from the 60s). While The Clash, obviously, have extraordinary appeal far beyond ska and reggae circles, their love of and reverence for Jamaican ska and reggae shines through on dozens of their tracks ("(White Man) In Hammersmith Palais," "Police and Thieves," "Rudie Can't Fail," "Guns of Brixton," "Wrong 'Em Boyo," "Revolution Rock," "Bankrobber," "Pressure Drop," "Armagideon Time," "Justice Tonight/Kick it Over," "The Call Up," "Junco Partner," "The Crooked Beat," "One More Time,""The Equalizer," "Living in Fame," etc.) and is what draws ska fans into their fold and keeps them there for life.

So, it makes sense that there have been a fair number of ska tributes and covers of Clash cuts (King Django's trad ska-via-New Orleans rendition of "Career Opportunities" is stellar--and Skinnerbox's cover of "Straight to Hell" was one of the few bright spots on the mostly dismal punk and ska City Rockers: A Tribute to The Clash from 1999; the Anger Management League's skinhead reggae versions of "London's Burning," "White Riot,""Janie Jones," "Career Opportunities," and "1977" on Clashed by the AML are terrific; and conversely, while we're here, the worst Clash tribute I've had the misery of hearing, again from 1999, is Burning London--there are so many things wrong with it that I don't even know where to begin).

With all this in mind, it shouldn't come as a shock that I'm eagerly anticipating the release of Golden Singles Records' double LP of The Clash Goes Jamaican, which features an international roster of ska bands covering the Only Band That Matters (check out a preview of all songs on the comp here; the complete track list can be found here). While I'm not sure of the release date for this tribute, ska fans of The Clash can immediately satisfy their cravings through Jump Up Records' incredible new The Clash Goes Jamaican colored vinyl single (available in red, white, or blue), featuring The Crombies and Green Room Rockers.

The Crombies' excellent, straight-on modern ska version of "English Civil War" (with a cool, new rocksteady instrumental intro that segues perfectly into the first verse, but doesn't give away the tune's easily recognizable melody) powerfully conveys its lyrical defiance in the face of oppression and dire urgency of this track's message. If you don't already know, "English Civil War's" melody is from the American Civil War-era song "When Johnny Comes Marching Home," but Joe Strummer transformed it into an anti-fascist warning--through the imagined takeover of Britain by a totalitarian regime--as he witnessed with great alarm the increasing popularity of the National Front in the UK in the latter half of the 70s (note the reference to George Orwell's "Animal Farm" in the lyrics--"as we watched the speech of an animal scream/the new party army was marching right over our heads"--and on the original single's picture sleeve).

On paper, a ska-soul version of The Clash's furious and righteous punk rock anthem "Clampdown" might seem misguided, but the Green Room Rockers pull this feat off magnificently, largely on the strength and conviction of Mark Cooper's vocals (when he sings "it's the best years of your life they want to steal," it's like he knows from first-hand experience!). On this track Strummer, an avowed socialist, advocates general resistance--even revolution--against the pernicious capitalist system, AKA "The Clampdown," that enriches the few by controlling and brutally exploiting the masses ("No man born with a living soul/Can be working for the clampdown/Kick over the wall, 'cause governments to fall/How can you refuse it?/Let fury have the hour, anger can be power/Do you know that you can use it?"). But "Clampdown" also illustrates someone's gradual acquiescence to the manipulation and propaganda of "the system" ("The men at the factory are old and cunning/You don't owe nothing, so boy get runnin'/It's the best years of your life they want to steal/But you grow up and you calm down and/Working for the clampdown/You start wearing the blue and brown and/Working for the clampdown/So you got someone to boss around/It makes you feel big now/You drift until you brutalize/You made your first kill now"). And throughout the song there are allusions to nationalism, xenophobia, and the Nazis' anti-Semitism that suggest fascism is the political system that the capitalists believe to be the most profitable/advantageous to them ("Taking off his turban, they said, is this man a Jew?/Working for the clampdown/They put up a poster saying we earn more than you/Working for the clampdown/We will teach our twisted speech/To the young believers/We will train our blue-eyed men/To be young believers").

The Clash Goes Jamaican single highlights The Clash's deep connection to the ska scene--and showcases two of midwest America's finest acts in the process--but it also serves as a reminder of how The Clash composed some of the sharpest, most potent, and still painfully relevant rebel protest songs in the history of popular music.
Posted by Steve from Moon at 9:42 PM