New Album from Nick Welsh: "The Life and Times of a Ska Man!" 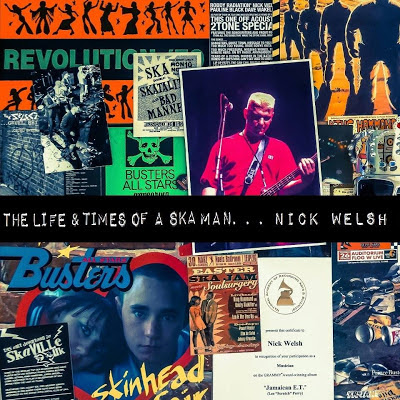 Fans of King Hammond--and we proudly count ourselves amongst that crowd--will want to be in on the pre-order of the new album from Nick Welsh, titled The Life and Times of a Ska Man, which contains new acoustic versions of Nick's songs from his vast catalogue of stellar songs from the past 20 plus years.

Here are all of the details from the man himself:


"My album The Life and Times of a Ska Man is now finished and I am now taking pre-orders for it. The price is £10 (including p + p) in the UK or £12 for the rest of the universe. You can pay via the King Hammond webpage. The first 100 people who order will receive a free N.1. Records album and a lovely badge. All the money made from this release will go into funding the next N.1. album, which will be Hot Skin Music by King Hammond."

Nick has had an extraordinary musical career, spanning from the post-2 Tone days of the mid-80s to the present day (the cover of his new album is a collage of many of the fantastic records he's released over the years--some of which are my all time favorites). He's served as the bass player and songwriter for Bad Manners (Return of the Ugly), Buster's All Stars (Skinhead Luv-a-fair), The Selecter (The Happy Album, Hairspray, Cruel Britannia), and Big 5 (In Yer Face, Popskatic), as well as his own groups, Skaville UK (1973, Decadent, Devil Beat) and his skinhead reggae alter-ego King Hammond (Revolution '70, Blow Your Mind, The King and I, Jacuzzi, Showbiz!, Dancing in the Garden of Evil). Plus, he's worked with ska stars like Lee "Scratch" Perry (picking up a Grammy in the process), Dave Barker, Judge Dread, Prince Buster, and Laurel Aitken.

(In addition, Nick is in the midst of writing his autobiography with Paul "Willo" Williams, which is also titled "The Life and Times of a Ska Man"--read an exclusive excerpt here.)

We've pre-ordered our copy of The Life and Times of a Ska Man...now it's your turn!
Posted by Steve from Moon at 11:50 PM