Editor's note: In an attempt to catch up on the huge backlog of releases that are awaiting my review--and to counter my obsession with solely composing long, in-depth write-ups (something that I just don't have time to do as much as I'd like to, sadly)--I'm launching this new series of brief, paragraph-length reviews. Titled "Over the Transom," my inside joke with Marc Wasserman about sneaking in ska releases and merchandise to our homes without attracting the attention of our respective wives, these batches of reviews are intended to give props to the many bands still recording and issuing great ska music, as well as alert ska fans as to which releases are worth their hard-earned cash. 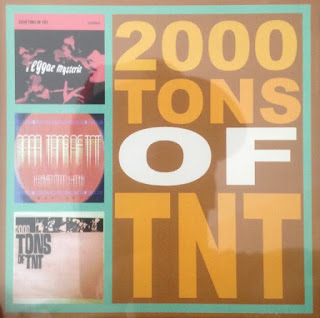 Pressed up to sell during their 2013 summer tour of the West Coast of the USA (and put a little money in their pocket and gas in their tank), this self-titled CD is actually a compilation of all of 2000 Tons of TNT's recorded output to date, including their boss 2012 debut Reggae Mysteria (read The Duff Guide to Ska review here), the 2013 "Harvest Moon" b/w "Wonky" digital single (read The Duff Guide to Ska review here), as well as the newish Lost Sampler, which was released in April and features, "Three lost (and very weird) tracks recorded in 2010-11" (the band's words, not mine). If you want to catch up on their crazy good garage rock-influenced dirty reggae (imagine The Caroloregians crossed with The Lyres), then pick up this disc at one of 2000 Tons of TNT's shows--or contact the band through their Facebook page to order a copy through the mail. 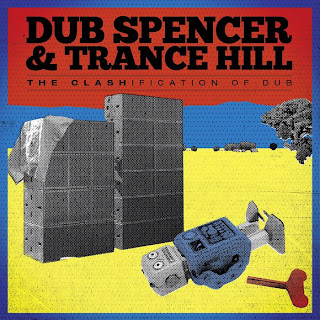 I know, this one has been out for a few years, but I just happened to stumble upon it recently while looking something else up on Amazon (it must have been the new Clash Sound System box set, housed in a cardboard 1980s-era boom box, which I had read about in Slicing Up Eyeballs--either a brilliant summary of their career or a despicable grab for cash; you decide). When I saw its clever appropriation of Give 'Em Enough Rope's cover, I had to at least check out The Clashification of Dub--my Clash obsession wouldn't permit anything less. After reading a review of the album on AllMusic by Rick Anderson (he used to do some nice write-ups of the Moon Ska promo CDs I'd send to him back in the 1990s) and listening to some of the song samples on that site, I was willing to fork over the cash for the import CD (and I even found and bought a new, thick, limited-edition vinyl LP version of the album--though with fewer tracks than the CD--for a few measly bucks from one of Amazon's Marketplace partners!).

Despite what album's cover might promise, Swiss reggae masters Dub Spencer and Trance Hill's The Clashification of Dub isn't a track-by-track dub version of Give 'Em Enough Rope (ironically, there are no tracks from that album here), but a selection of songs from throughout The Clash's brilliant catalogue. It should be stressed that this is not a remix of the master tapes (were that even possible!)--Dub Spencer and Trance Hill deconstructed these reggae and punk songs, recorded their own instrumental renditions, and then fashioned these dub versions at the mixing desk. The results are a sometimes radical re-working of some of the most revered Clash tracks, which may not always suit Clash purists. But if you approach these cuts with an open mind (a love and basic understanding of dub helps!), you'll discover a magnificent, inventive, and richly complex album that pays tribute both to The Clash and dub (that I find myself returning to repeatedly--since I seem to notice new bits every time I listen to it).

While some versions of these songs retain enough elements of their original melodies/riffs to be almost immediately recognizable ("Guns of Brixon," "Bankrobber," "Train in Vain," "Police and Thieves," "London Calling," "Rock the Casbah," and a fantastically upbeat "Armagideon Time," which unfortunately isn't on the LP)--and provide the listener with a means of easy access to the album--other tracks require more careful listening in order to discern subtle echoes of their source material (see "Lost in the Supermarket," "Magnificent Seven," "Should I Stay or Should I Go," or even "This is England," off the illegitimate Cut the Crap).

Probably my favorite track here is "The Call Up" from Sandinista, The Clash's haunting anti-conscription/anti-nuclear war plea ("It's up to you not to hear the call-up/I don't wanna kill!/For he who will die/Is he who will kill/Maybe I wanna see the wheat fields/Over Kiev and down to the sea/All the young people down the ages/They gladly marched off to die/Proud city fathers used to watch them/Tears in their eyes/There is a rose that I want to live for/Although, God knows, I may not have met her/There is a dance and I should be with her/There is a town, unlike any other..."). In Dub Spencer and Trance Hill's hands, their dub with its spooky effects evokes the Cold War paranoia, isolation, and dread of the first half of Reagan's presidency (the man who had his finger near the nuclear launch button--and who took a hard, sometimes extremely belligerent line against the Soviets, while massively ramping up the U.S.' military spending--freaked a lot of people out by declaring, "We may be the generation that sees Armageddon."). Back then, we really, truly believed that there was a good chance that we'd all perish in a hail of Soviet ICBMs...

Perhaps the best way to sum up/characterize The Clashification of Dub is that I imagine if Joe (RIP), Mick, Paul, and Topper (of course, massive fans of reggay) ever had the chance to hear this album, they'd completely love and embrace it. And for of all us Clash fans (myself included), courtesy of Dub Spencer and Trance Hill's inspired musical creativity, this is another take on--and excuse to revisit--some of the best music ever produced by the Only Band That Matters.

Email ThisBlogThis!Share to TwitterShare to FacebookShare to Pinterest
Labels: 2000 Tons of TNT, Dub Spencer and Trance Hill, Duff Review, Over the Transom, The Clash