NYC Goes 2 Tone: The Specials and Roddy Radiation This Week! 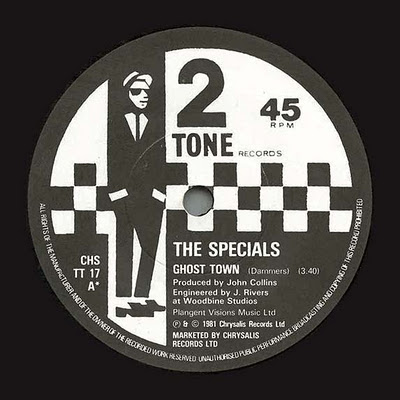 I first heard about The Specials at their end. Sometime during the week of July 11, 1981, when Britain was convulsing with riots due to a toxic combination of high youth unemployment and the police's abuse/oppression of people in non-white communities and The Specials' magnificently haunting and relevant swan song "Ghost Town" happened to top the UK charts, NBC Nightly News--of all places--ran footage of the riots with "Ghost Town" as its soundtrack (and commented on the irony of it all). I didn't see the actual music video for "Ghost Town," directed by Barney Bubbles, until years later (MTV didn't exist at the time), but if the sights of Brixton, Handsworth, Chapeltown, and Toxteth burning, with pitched battles between youth and the police in the streets didn't sufficiently portray the dread and apocalyptic societal meltdown conveyed in Dammers' song, I don't know what would've.

Even though I had been a middle schooler at a boarding school in Manhattan in the late 70s/early 80s (how I came to be there is a long story for another time), I had completely missed all of The Specials' NYC performances, such as their January 25, 1980 date at Hurrah's or their August 12, 1981 date at Pier 84 on the Hudson with the Go-Gos (and, much to my regret, The Clash's legendary residency at Bond's in June 1981)--my school wasn't very far from any of these venues (and during the summers I was home in nearby Yonkers). My friends and I just weren't plugged into these scenes yet (and info on non-mainstream, UK bands was really hard to come by). Much of what I knew about music, and new wave in particular, came by word-of-mouth or happy accident (my boarding school bunk mate introduced me to The B-52s at a time when most of my peers were into Kiss and Aerosmith; I first heard The Ramones' "I Wanna Be Sedated" at a middle school dance--where they also played "Rock Lobster" at least three times by popular demand; though I don't remember who lent me the cassette of Devo's Freedom of Choice--I played "Whip It" over and over until the tape practically disintegrated).

I heard much more of The Specials (and all of the 2 Tone-era bands) on WLIR, the brilliant modern rock/new wave station on Long Island that became my lifeline during high school in the first half of the 1980s (and introduced me to some of the greatest music ever produced). Since I hung out with a multi-racial crowd in Riverdale/Yonkers, I found one of the most appealing aspects of The Specials, The Selecter, and The Beat to be their strongly anti-racist stance (in addition to their incredible music). And even though it wasn't exactly ska, The Special AKA's "Free Nelson Mandela" and In the Studio were mind-blowingly good and hugely popular in my circle of friends. But my full-on passion for The Specials was revived/rebooted in the mid-to-late 80s (college years), as I discovered the stellar NYC ska scene (The Toasters, The Scofflaws, The NY Citizens, and Skinnerbox), Fishbone and The Untouchables, as well as the incredible post-2 Tone ska scene in the UK (Laurel Aitken, Potato 5, The Deltones, Bad Manners, The Loafers, etc.). Years later, Jerry Dammers' musical, political, and cultural vision had spawned so many extraordinary bands, so I made it a point to more closely examine/enjoy the source (which, of course, only led me back to genre's real origins with the 1960s bands in JA).

Several years later, when I was working for Moon Records, I found myself in the wing of the massive stage at the Manhattan Center watching The Scofflaws (I think!) perform at the NYC date for the 1993 Skavoovee Tour (Special Beat, Skatalites, Selecter, and Toasters). At one point, I looked around and the only other person nearby was Specials' drummer John Bradbury who was equally as captivated by The Scofflaws' performance as I was. I was too shy to approach him, but I found that simple moment to be pretty cool and memorable (I felt too awkward/intimidated to hang out with bands backstage then).

When The Specials MK II played out in the mid-to-late 1990s, I avoided seeing them (I had been scared off by the less-than-stellar Today's Specials and felt that they really shouldn't have been touring using The Specials' name with several key members missing). However, when all of The Specials (with the frustrating exception of Jerry Dammers) decided to reform and tour several years ago, I had desperately wanted to see the band at Terminal 5 in April 2010, but obligations at my job at the time kept me from going (I was running a fundraising event at a non-profit I worked for that same night). All of my friends who went were kind enough to tell me what an amazingly good concert I had missed. Much appreciated, guys.

So, The Specials' NYC date this week feels like a once-in-a-lifetime/last chance for me to see (most of) them live (since I can't really imagine that they'll do another big tour after this). I'll be the middle-aged guy in the 2 Tone shirt with a full head of spikey hair enjoying the hell out of himself and making up for a lot of lost time.

While I don't expect to get anywhere near the stage at The Specials' show this week, Roddy Radiation will be up close and personal at his solo Electric Avenue performance this Friday night. Roddy will be playing his own fantastic ska-influenced rockabilly tunes (usually played with this band The Skabilly Rebels), as well as the well-known Specials' tracks he penned ("Concrete Jungle," "Rat Race," "Hey Little Rich Girl"). NYC's terrific Pandemics will be opening the night and it's rumored that they'll back Roddy on The Specials' songs. I'll be sharing the decks with my friend Marco on the Bass--playing an eclectic mix of vintage and modern ska. Hope to see you there!

(For some background on Roddy, check out this interview I did with him for The Duff Guide to Ska back in 2011 here.)

Email ThisBlogThis!Share to TwitterShare to FacebookShare to Pinterest
Labels: 2 Tone, Fishbone, Moon Ska Records, Roddy Byers, Roddy Radiation, The English Beat, The Scofflaws, The Selecter, The Special AKA, The Specials, The Toasters, The Untouchables