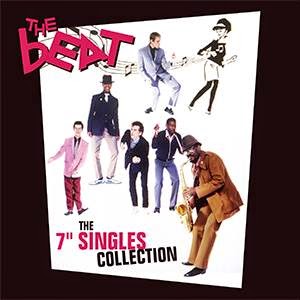 In addition to the UK-only Madness "Lovestruck" vinyl single and the US/UK Trojan Records' Rude Boy Rumble compilation LP, ska fans in the UK who don't already have them (or want to replace any scratched up copies currently in their collection) will be interested to learn that Demon Music Group is issuing The Beat's The 7" Singles Collection" for Record Store Day 2015.

This box set contains thirteen Beat vinyl 45s, from their 2 Tone debut, "Tears of a Clown," to their last Special Beat Service single, "Ackee 1-2-3"--and everything in between: "Mirror In The Bathroom," "Hands Off... She’s Mine," "Best Friend," "Too Nice To Talk To," "Doors of Your Heart," "All Out To Get You," "Hit It," "Save It For Later," "Jeanette," "I Confess," and "Can’t Get To Losing You." A 16-page booklet is included, presumably about the band and each single. Only 1,000 copies of this set are being pressed.

It seems a bit odd that this set isn't being given a US release, as The Beat were enormously popular in America during the new wave era (and many of those former kids who bought The English Beat's records are now all middle-aged people who are probably still buying music in physical formats--and didn't have the chance to purchase many of the band's UK-only singles back in the day!). For now, American fans should hit up any family or friends in the UK and ask them to pick up a copy--or get ready to bid a lot cash on eBay...