Duff Review: Reggay Lords "Run or Get Down" 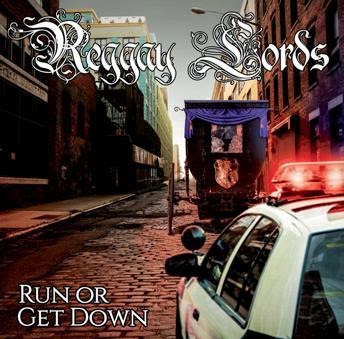 First, a brief biographical sketch: The Reggay Lords are an early reggae supergroup of sorts, with members from drawn from such acts as Coldspot 8, The Rudie Crew, The Pinstripes, The Hard Times (RIP), and The Forthrights (RIP), who perform dressed as 18th century English lords (replete with powdered wigs, puffy shirts, embroidered jackets or velvet robes, and the occasional mead-filled chalice) and speak in condescending (and tongue-in-cheek) tones to the ska rabble that gather to receive their musical beneficence. (Read The Duff Guide to Ska review of one of The Reggay Lords' live shows here.)

While their costumes, stage antics, and lordly attitudes are definitely entertaining and engaging (absolutely see them live if you have the chance), The Reggay Lords' music really delivers. Run or Get Down, the Lords' second album (their superb self-titled debut was released in 2013), contains track after track of highly catchy and danceable dirty reggae and is a definite "must purchase"! (Also, it's a vinyl-only release, so this is yet another in a long line of reasons to join us music luddites and dig out or buy a turntable...)

As the album cover might suggest, the Lords are highly critical of the police's abuse of power and heavy-handed treatment of the "commoners" (to use their parlance) on two of the ten cuts here (which are stingingly relevant in light of the death of Eric Garner and its impact on New York City; the years of unconstitutional "stop and frisk" policing in NYC that targeted vast numbers of innocent men of color; and how the police are used by local--and racist--governments to prey on communities of color for municipal revenue--surely, a scheme that is not limited to Ferguson, MO). The title track's lyrics lay it all out--essentially, positing that the residents of neighborhoods can regulate themselves, while the police are agents of violence and chaos:

And if a bully boy him come down
He get beat down by de block
And the only big man that a flash him gun
Was the one, him drunk, a cop

Everybody run or get down
He say..."

The other (rather chipper and defiant) song relating to the police is "One Day," a clear warning (and an expression of yearning for deliverance) that envisions a time of revolution when the agents of Babylon will no longer be in a position to torment and mistreat the people:

"Oh, and what a wonderful world it would be...

The rest of the songs on Run or Get Down aren't quite as heavy (though the "High John" is an awesome supplication to a higher, regal authority/"conquerer" to "protect me now and always do not let my enemies rest--not in a chair, not in a bed!"). "Spirit" wonders how you can come across the ghost of someone who's still alive (the walking dead are not limited to the ranks of the undead: "When a man's not in the ground, yeah/How could you see his spirit, no!"). Propelled by a buoyant popcorn reggae organ line, "Oh Lord" serves as a jubilant theme song of sorts ("You know we're working!/Reggay Lords, that's our job!"). "It's a Game," with its terrific Middle Eastern-sounding, minor-key guitar riff (shades of Dick Dale), has a tense, plodding tempo and feel that reflects the heavy burden the singer's shouldering after realizing he's surrounded by manipulative, pernicious fake friends ("It's a game to them, how they put you down/It a game to them, that's why they're always around/Put me in one spot, they told me not to move about!"). The sweetly nostalgic ice rink organ of "Big Girl" masks the loss of youth, time, and innocence (and the sadness over how the years have transformed the childhood friend--first crush?--into a stranger): "You used to be the little girl I used to play with/You used to be the little girl I used to stay with...Where did you go?"

The Upsetters-like "Nice Shoes" is a tightly-wound, organ-centric instrumental with menacing exhortations about the risks of dressing sharply in dicey neighborhoods: "Nice shoes, my brother!/Lace by lace/Block by block/Gonna take that man's shoes/Gonna leave him in his socks!" There's a Greek myth quality to the warning contained in "There Was a Woman," which recounts the story of a siren-like woman who could lure men to their death, since they could not resist her sexual attractiveness--or see the trap that it hid ("There was a woman/She threw a contest/She don't care for the rules/She don't play by the book/A woman/She threw a contest/And when a man gets speared/All she wore was her hair/The gal could do nothing but win..."). The album ends on a lighter note, with the celebratory, good times "Barrister's Ball": "Down at the Barrister's Ball/Them don't serve no tea at all/Now all the ladies line up in the attic/Across the room and give we a wink/They never wear no funny trousers/You don't what will arouse her." Nice up the dance, indeed.

The ska scene needs more royalty like this! Make sure to hail the Reggay Lords and pick up their Run or Get Down now!