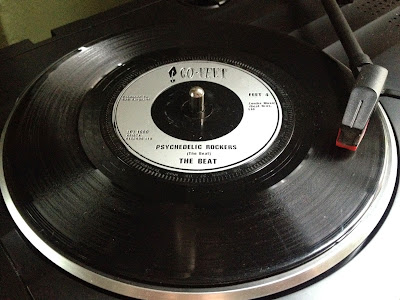 This post probably will be most appreciated by my fellow Generation Xers who remember what it was like to be a music fan/record collector in the dark, but fun, days before the rise of the machines--um, I mean--the internet. A time when information about a band or release was sometimes very hard to come by, particularly if you were interested in non-mainstream acts from the UK...

In the 1980s, in addition to releasing all sorts of remixes of songs (mostly on 12" records, which were all the rage), labels would sometimes issue different versions of an album or compilation on LP and cassette--and, later, CDs, once the players and discs became more affordable for guys like me in college with part-time jobs. This was done to entice the rabid fan to buy the same release in different formats, since you really might need those bonus/alternate tracks (a good example of this practice was the release of an essential 1986 Cure compilation, which on CD was titled Staring at the Sea and contained 17 cuts, while a 25-song, double-cassette version called Standing on a Beach contained a slew of UK-only b-sides not found on the CD!). But with the poor flow of music information, vagaries in record store stock, and general lack of funds, it was easy to be completely unaware of--or near impossible to obtain--rare, remixed, or live versions of tracks from your favorite bands.

I had discovered The (English) Beat in the very early 1980s on WLIR, just after the release of Wha'ppen and became a huge fan when I bought Special Beat Service (I heard about The Beat's show in NYC at Roseland in support of that album the day after it happened). In 1983, following the much lamented break-up of The Beat, I picked up the IRS version of What Is Beat?, which contained a fair amount of material never before released in the US. I figured that with this comp and their three phenomenal albums, I probably had just about everything (with the exception of live recordings and bootlegs) from the band worth owning.

Several years later in college, while hanging out with some friends in one of their rooms, someone put on the What Is Beat? cassette and I started hearing tracks I'd never heard before, like "Which Side of the Bed" and "Psychedelic Rockers"--which was a complete revelation (I played that song over and over on her boom box!). To this day, it remains one of my favorite Beat tracks. (Neither Sire nor I.R.S ever released the "Too Nice To Talk To" b/w "Psychedelic Rockers" single in the USA; in fact, I don't think any Beat singles other than "Twist and Crawl" b/w "Tears of a Clown" were released here until those that were spun off Special Beat Service, like "Save it for Later" and "I Confess.") I didn't have the chance to own "Psychedelic Rockers" until the release of the import-only B.P.M. ...Beats.Per.Minute in 1996, which I came across at the long-gone HMV that used to be on 86th Street and Lex in Manhattan. A few years ago, I had the good fortune to stumble across and buy a used copy of the 7" version of "Psychedelic Rockers" (someone had written "disco ska" on the generic paper sleeve) at a record stall in Chelsea. To my great delight, I found the 7" single cut to be much better to the "Dubweiser" mix on B.P.M.

When I was hosting the Electric Avenue ska nights at Characters in midtown Manhattan with my friend Marc Wasserman a few years back, I pretty much worked "Psychedelic Rockers" into the mix of wax spinning on my turntables at almost every one of our shows. No one ever complained...