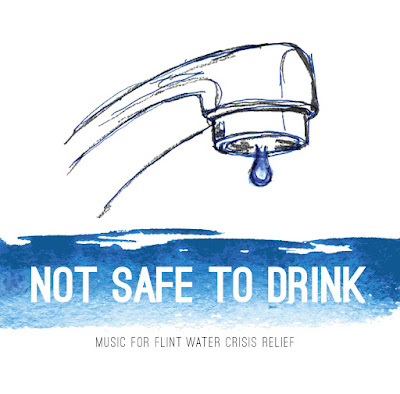 If you've been following the news (and you should be), you know that the cost-cutting actions taken by an emergency manager appointed by Michigan Governor Rick Snyder, who switched the city of Flint, MI's water supply in April 2014 from Lake Huron to the heavily polluted Flint River, which ended up corroding the city's aging lead water pipes and releasing extremely high levels of lead into the tap water--resulted in the poisoning of Flint's residents, who were drinking and bathing in this incredibly toxic brew (during this time, GM's factory in Flint stopped using the city's water supply, as it was rusting its engines, and the state brought in bottled water to its buildings in Flint and told employees not to drink from the water fountains, while Flint residents continued to use the city's tap water).

It appears that for about 18 months, state officials ignored signs that Flint's water was completely unsafe to drink and dismissed pleas from Flint residents and officials for action to be taken to remedy the situation. Even worse, it is estimated that up to 8,000 Flint children six years and under may be suffering from the irreversible effects of lead poisoning. [Update, 2/7/16: Rolling Stone has an excellent piece explaining how all of this transpired in their February 11, 2016 issue.]

Last October, Flint's water supply finally was reconnected to Lake Huron, but its pipes continue to leach lead (and who knows when these pipes will be replaced).

Multiple state and federal investigations of this outrageous and horrific man-made disaster are now underway. But there is a long road ahead for the children of Flint--many of whom will experience life-long developmental disabilities and physical ailments as a result of their poisoning. [Update, 2/6/16: The New York Times just published this editorial that sums up this whole outrageous fiasco and how Republicans at the federal and state level are fighting efforts to help the citizens of Flint.]

A group of Michigan musicians (and sympathetic out-of-staters) led by Baggage's Jonathan Diener are collaborating on an album to benefit FlintKids.org, which is the Flint Child Health and Development Fund--administered by the Community Foundation of Greater Flint--and will support local crisis response, optimal child health and development, early childhood education, educational and student support services, continuous access to a pediatric medical home, access to infant and child behavioral health services, nutrition education, healthy food access, safe and healthy home environments, integrated social services, and research. The Not Safe To Drink: Music for Flint Water Crisis Relief charity album--to be released on February 20, 2016--will feature over 50 bands (punk, alternative, metal, ska, and more) and is available to pre-order now (the minimum suggested donation is $5). Keep up on this project via the Not Safe to Drink Facebook page.

Ska fans will be interested to note that Big D and The Kids Table and J. Navarro and the Traitors (members of The Suicide Machines and 1592) have contributed tracks to this vital effort.

The 100,000 residents of Flint are our people (they're fellow Americans and fellow human beings)--they're us. And they need our help. So, please consider donating to Not Safe To Drink: Music for Flint Water Crisis Relief! If we join together, we can make a difference!

Email ThisBlogThis!Share to TwitterShare to FacebookShare to Pinterest
Labels: 1592, Big D and the Kids Table, Flint, J. Navarro and the Traitors, MI Water Crisis, Not Safe to Drink, The Suicide Machines