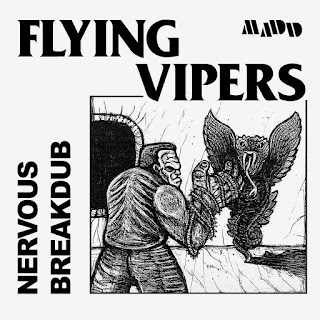 Flying Vipers Nervous Breakdub (digital, Music ADD Records, 2018): Twin brothers Marc and John Beaudette from the mighty Boston reggae/punk/rock band Destroy Babylon are the driving force behind the fantastic dub and roots reggae act Flying Vipers (we've previously reviewed their Green Tape, Copper Tape, and Johnny Clarke Meets Flying Vipers single--all are great). Their latest effort is an incredible dub version of Black Flag's debut Nervous Breakdown EP, released 40 years ago this month. Flying Vipers' version of this punk/proto-hardcore classic conveys the original's edge and general unhinged-ness as one extended dub cut covering all five-plus minutes of Black Flag's short, sharp, shocks of fury ("Nervous Breakdown," "Fix Me," "I've Had It," and "Wasted"), using only drums, bass, melodica, effects, and the space between. Their take on Raymond Pettibone's sleeve artwork is pretty cool, too. If you like Black Flag and dub (and even if you just like dub), you'll get a big kick out of this.