Duff Guide to Ska Fast Takes: K-Man and The 45s and Pama International! 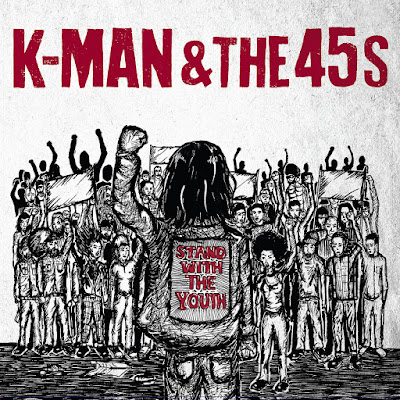 I've been hearing really good things about Montreal's K-Man and The 45s for several years now (mostly in relation to the annual Montreal Ska Festival), so it's great to finally have a chance to review a new record from these ska/rock 'n' rollers (who veer into reggae, punk, even '80s hardcore--see the excellent, fiercely anti-heroin track "Don't Touch It"). Stand with the Youth (CD/digital/LP, Stomp Records, 2019) is K-Man and The 45s' dynamite fourth album (if you include their CD of ska covers of Ramones tunes) and its title track was written and recorded in response to the activism of the student survivors of the horrific Parkland school shooting and their allied peers who are organizing and advocating for sensible gun control laws in the US to help prevent future mass shootings, which continue to occur with alarming (yet increasingly numbing) frequency. K-Man and The 45s firmly side with the kids in this righteous cause: "We got a bullied young boy who wants to shoot it up/Then we watch it on the news how he went and lit it up/And now the youth of the nation ain’t giving it up/Because they’re fighting for their freedom and ain’t never going to stop." "Hooligans" pushes back against the gentrifying real estate developers ("goons with clipboards") who destroy vital and funky neighborhoods/communities for greed; the hard rocking "Paranoid Panic" is about succumbing to the fear created by the never-ending barrage of sensationalized crime stories in the media ("Another drive by on the news tonight/Seems like the neighborhood is one big fight/It’s a revved up panic that’s pushing her through the night"); and "Free to Go" encourages a woman to leave her physically abusive partner. But it's not all grim. The ridiculously catchy--and best cut on the album--"I've Got a Minute" ("...I want to waste it with you") is about working up the nerve to ask her out. "Hero with a Death Ray" is an homage to Cold War-era TV sci-fi characters like Flash Gordon or Captain Kirk ("Flying around going to slingshot in deep space/Hyper drive winning at the space race/Pick up the trophy, kiss the girl/Then he sets off to save the world." And the reggae track "Cooking Out the Pans" is concerned with nothing but the simple pleasures of hanging out on a beach, eating fish, smoking weed, and listening to live music. Anyone itching for a new Toasters record should absolutely grab this--most of the fantastic horn lines and arrangements sound like they could have been written by Bucket himself (and both bands share an admiration for '60s ska influencer Chuck Berry; on this record, K-Man and The 45s deliver a cool ska cover of "Never Can Tell"...). 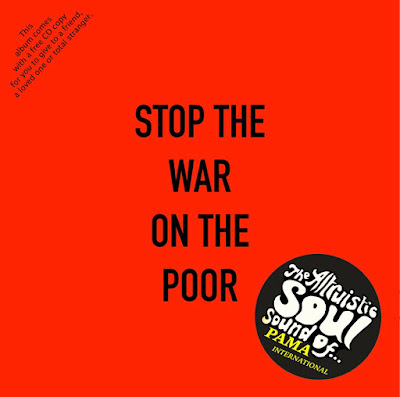 Temporarily shedding their ska and reggae to fully explore the "altruistic soul" aspect of their sound, Pama International's Stop the War on the Poor (CD/digital/LP, Happy People Records, 2019) is a spectacular concept album of sorts, full of Motown and Stax-like songs by Sean Flowerdew and Lenny Bignell about love in all its forms--romantic love between people; the spiritual/moral love in forgiveness and redemption; and the love expressed through compassion and empathy for your fellow human being. Cara Jane Murphy and Jewels Vass split the vocal duties here (sides A and B, respectively) and both are are nothing short of amazing. Top cuts here include the Birmingham gospel/soul of "Get Up Off Your Knees" ("Lord he dared me/Raised my heart and compared me/To something he had trod in/Spreading disease/To my shame/I played him at his own game/Lord, get me off my knees"); the Detroit soul of the wonderfully named "Sure You Know the Price (But Do You Know the Cost)," which asks if you're willing to go all in--being vulnerable and risking hurt and more--for who you love ("I put myself in your heart/For all the good it did/Failed to understand/All that you kept hid/What's the use in worrying/If you never doubt/You get all that you give out"); the magnificent "Stop the War on the Poor" pleads for our collective focus to turn towards the corruption and criminality of the rich and powerful (who have rigged the system in their favor at the expense of everyone else) that is largely being ignored while the indigent are blamed for society's ills and punished/humiliated for their own supposed moral failings for not being materially successful; a great Temptations-like cover of Billy Preston's "You Are So Beautiful To Me"; and "I Love You (Wake Up)," which conveys sweetly intense longing and loneliness ("Four o'clock/Still awake/Waiting for/the day to break/Where are you?/Lying in silence/Deafened still/Don't want to spend/Another night/without you"). I'm not an expert on soul, but--damn--I know brilliant music when I hear it and Pama International's Stop the War on the Poor is it! All CDs and LPs come with an additional, free CD to share the musical love with friends, family, or strangers on the street!