The Surprising Musical Roots of The Specials' "Ghost Town" 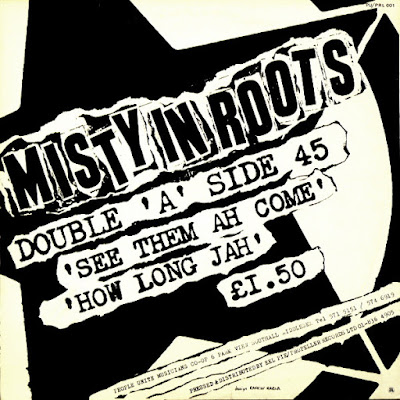 I recently tracked down a copy of Roland Link's excellent band bio of The Ruts (who, of course, backed the great Laurel Aitken as the Unitone on the two singles he released during the 2 Tone era; The Ruts also performed with Aitken on tour and for a John Peel session!) and came across a bit of info about The Specials' "Ghost Town" that was entirely new to me (and I've read and re-read two pretty authoritative books on the band-- George Marshall's "The Two Tone Story" and Paul Williams' "You're Wondering Now: The Specials from Conception to Reunion"--as well as numerous articles and features on the band and that song).

The Ruts' bass player Segs (AKA John Jennings) confesses in Link's "Love in Vain: The Story of The Ruts and Ruts D.C." that his band had swiped the bass line from Misty in Roots' fantastically dread and defiant "See Them Ah Come" for their first excursion into dub, "Black Man's Pinch (AKA Give Youth a Chance)"--the only recording of which can be found on The Ruts' phenomenal and positively blistering Peel Sessions Album. Misty (an all black UK roots reggae act) were good friends of The Ruts (all white punks), taught them how to play reggae, and the two bands played dozens of Rock Against Racism shows together in the late '70s. Misty in Roots also ran the People Unite label, which released The Ruts' debut single "In a Rut" and operated out of their own vibrant community center (the People Unite Creative Arts and Educational Centre) in Southall, London. The center and all of Misty's instruments and record stock were later destroyed by the notorious and racist Special Patrol Group during a police riot in the midst of a National Front march through this black/West Indian immigrant neighborhood; the band's co-manager Clarence Baker was beaten (along with many others) and grievously injured by the cops, and Baker was hospitalized for an extended period of time afterward; all of these outrageous and completely illegal events were conveyed in The Ruts' song "Jah War."

As it turns out, Jerry Dammers also nicked a considerable amount of Misty's "See Them Ah Come" for "Ghost Town" (listen to the former's keyboard line)! Check out this passage from Link's book: "[Misty co-manager and sound technician] Chris Bolton also later recalled another lift [in addition to The Ruts'] of the same track ["See Them Ah Come"]. 'I give talks for anti-racism movements and The Specials' Jerry Dammers does so as well. He came up to me at one of the events and said, "Ghost Town. You know we ripped that off from Misty?" I said, "Yes, we knew that Jerry--respect to you for admitting it!"'"

It's also interesting to note that The Specials' and Misty's tracks are linked lyrically, as they're both protest songs of sorts. While, "Ghost Town" decried Thatcher's war on/abandonment of the working class (unemployment--particularly amongst the youth--was at an all-time high, resulting in widespread urban decay, and a societal breakdown expressed through frequent outbursts of violence), "See Them Ah Come" is about standing up to injustice (and, one imagines, Inglan's racist institutions/society): "Even though I walk through the valley of the shadow of the wicked/I shall fear no evil/Sure and steadfast as anchor to a rock I shall stand/Me nah run/See them ah come, see them ah come/But me nah run."

Always thought he robbed the line from Seven Wonders of the World. Is that were Misty got it from? Also there's a Gregory Isaacs song Jerry got the beat from I remember reading about.
https://www.youtube.com/watch?v=B_2Cs9Rc4Go

Actually, maybe Misty did rob that line from Buster's "Seven Wonders of the World!" Good call!

Yes, Dammers loved the sound of Victor Romero Evan's "At the Club" (https://www.youtube.com/watch?v=xFJI6Z2bzL8), which John Collins had produced, and wanted that kind of production for "Ghost Town."

And during the recording of "Ghost Town," Collins had John Bradbury listen to Gregory Isaacs' "Oh What a Feeling" (https://www.youtube.com/watch?v=rX4WTQIxU1E) to help give him an idea of the drum sound he thought the track should have...

In general, everyone is influenced or borrows from someone else and then creates something a bit newer, right?

As our bass player always says "pay homage, not royalties" :-)