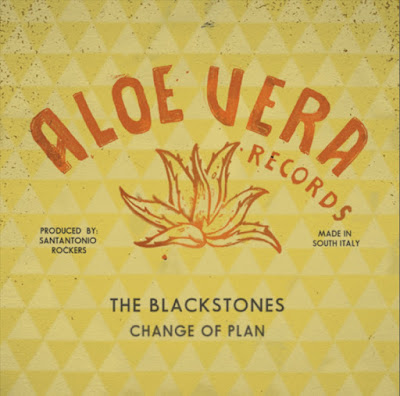 This is the third single from Italy's finest purveyor of vintage mid-'60s ska sounds bar none, The Officinalis (Latin for plants used for medicinal purposes). For the A side, they team up with The Blackstones, a UK-based reggae vocal trio that had some success in the late '80s and early '90s (and were notable for being one of the last acts that Coxsone Dodd recorded prior to his death in 2004; their album Tribute to Studio One was issued in 2005--since I never can get enough of the "Real Rock" riddim, I have to point out that their "Don't Chuck Badness" is a great cut off this record). "Change of Plan" is a beautiful--if heartbreaking--plea to a wayward partner, full of absolution and hope: "But, if you love me true/All you have to do/Is come on home." The falsetto harmonies, which may remind one of The Melodians, The Mighty Diamonds, The Techniques, Carlton and the Shoes, and others, are spot-on and splendid. "Santantonio Special" is an incredible, minor-key, mid-tempo, spaghetti-Western-ish original instrumental that sounds like a cut Prince Buster Allstars (essentially The Skatalites) would have recorded back in the day (speaking of Prince Buster, make sure to check out The Officinalis' stellar tribute to him, "The Champ," off their second single). This record is a knockout--don't miss it!

Huge thanks to Sergio Rallo for the recommendation!