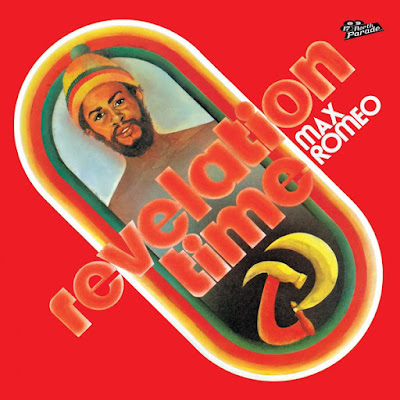 Even though Max Romeo's Revelation Time was issued as a series of singles for the Black World label prior to the record's release in 1975, according to Steve Barrow's 1999 liner notes for Blood and Fire's Open the Iron Gate, 1973-1977, Romeo always intended these to form a concept album that would help support political efforts to alleviate the dire income inequality present in post-colonial Jamaica: "It came from 1972, when we had a revolutionary movement, with Mr. Michael Manley trying to change society from capitalism to socialism. At the time I was socialist-minded--beca’ it’s the only form of poor people government, socialism. So, bein’ a socialist, that album was actually fed into that area; it was helping to project awareness among really uneducated people." And, at least in artistic execution, Romeo wildly succeeded. Recorded at Lee "Scratch" Perry's Black Ark (with "Scratch" as engineer) and at Randy's Sound Studios, and produced by Clive Hunt, Pete Weston, and Lee "Scratch" Perry (for "Three Blind Mice"), Romeo's absolutely stellar, highly melodic roots reggae tunes presented within lean arrangements focus one's attention on his uncompromising lyrics railing against poverty and injustice (with Old Testament-style retribution to come). The album packs a series of mighty wallops that still land on their targets to this very day.

Throughout, Romeo's fantastic singing is impassioned, but not overly dramatic, which makes boldly revolutionary tracks like "Warning Warning" all the more chilling (particularly, if you're a predatory capitalist):

Your life here on earth has been filled with luxury and pleasure
You have made yourself fat for the day of slaughter
You've not paid the men that work in your fields
The cries of those that gather your crops
Have reached the ears of Jah, Jah Almighty

Heads a go roll down Sandy Gully one of these days...

In a similar vein, the tremendous "Revelation Time" is less Biblical apocalypse and more Workers of the World Unite in its message (that also addresses police corruption and anti-Rasta discrimination):


Revelation time
Wedge up your hammer!
Sharpen up your sickle!

The simplest thing is,"bang, bang, bang"
What is this on our little island?
If every man was equal, you see
There would be none of this poverty

The mesmerizing, bare-bones "Blood of the Prophet" conveys the hardship of metaphorical exile and continuing to pay for the Biblical sins of one's forefathers and mothers, even though one leads a righteous life:

Rachel mourns for her children
They have killed the prophet
And burned down the altar
Whooah, what a slaughter!
The blood of the prophet
Is on the shore of Babylon
Whoah, what a woeful situation!

"Open the Iron Gate" presses the case that Babylon is out of control and deliverance is sorely needed ("I want to survive this armageddon/Poverty and frustration/What a wicked situation/Jah, Jah, open up the iron gate/And let your children repatriate"), while "Tacko" calls out the "fools" who reported/believed Rastafarianism was finished because Haile Selassie had died. "Three Blind Mice" is about the ridiculousness of a police raid on a party: "The police checked the deejay/Tell him to turn off sound/The crowd never like that/Them start gathering 'round...Let the music play!"; this single ended up being a hit for Romeo on Perry's Upsetter label.

Most poignantly, Romeo's grappling with all of the needless suffering inflicted by the powers that be on his fellow human beings leads to the most empathetic song on the album, "A Quarter Pound of I'cence," which expresses the anxiety, desperation, and restlessness that comes from living in a mad, oppressive economic system--and the longing for a temporary escape by getting high:

There ain't no peace in this part of town
I can't stand this roaming, this roaming around
I have the urge to go out of my mind
There must be some peace, some peace I can't find

Romeo's studio work with Perry on Revelation Time led them to expand their collaboration on War Ina Babylon. While side A of that record is brilliant (as is Perry's production), and the title track and "I Chase the Devil" are bona fide roots reggae classics, Revelation Time is a consistently better album start to finish. Following the smash international success of War Ina Babylon in 1976, the previously JA-only Revelation Time was issued (with alterations in tracks and running order) in Canada in 1977 as Warning Warning! on Surface/Jam Sounds; in the USA in 1978 as Open the Iron Gate on United Artists Records as part of their incredible "Anthology of Reggae Collectors Series"; and in the US and UK in 1999 as Open the Iron Gate, 1973-1977 on Blood and Fire Records. Yet, the delayed release of Revelation Time outside of Jamaica ended up putting off many listeners and unfairly diminished the public perception of this record, as it seemed to be a throwback in the progression of roots reggae and its stripped down sound was so radically different from Perry's rich and masterful War Ina Babylon production.

While the Blood and Fire version of this album is a must have (the mastering is extraordinary and it includes the essential "Melt Away," "Valley of Jehosaphat," and "Fire Fe The Vatican" tracks), VP's CD edition includes additional dubs, like "Heads A Go Roll" and "Hammer and Sickle," and equally great and politically-charged contemporaneous singles, including "Socialism Is Love" and "Black Equality" (note: the LP doesn't contain these bonus tracks). If you're interested in Max Romeo's masterpiece Revelation Time, copies of both should be acquired.