Duff Review: Detroit Riddim Crew "Do Something" b/w The Skapones "The Girl Inside" 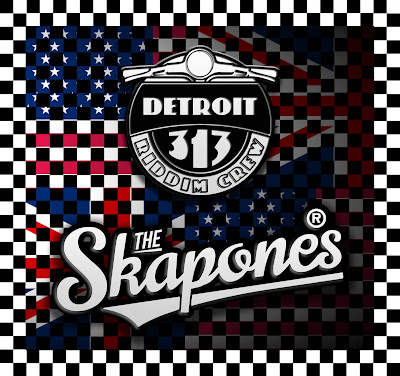 It's absolutely fitting that the boss new release from the Detroit Riddim Crew and The Skapones is a split single. Not only is this format a throwback to the DIY 1980s, the sounds captured within will remind one of that era in ska, too (if I told you that both songs are from one of Unicorn's Skankin' 'Round the World comps, and you didn't know better, you'd believe me). The Detroit Riddim Crew's  awesome "Do Something" is a heady mix of Gangster Fun (also from Detroit!) and The Toasters circa Skaboom!--and is a call to action to get involved (vote, volunteer, advocate) and change what's wrong in the world around you: "Get off the ground/Quit doing nothing/Put down the bacon/Get off your ass/Do something!" (A portion of the proceeds from this single will go to the Detroit Black Community Food Security Network.) The UK's Skapones are heavily 2 Tone-influenced (their singer Paul Willo, of course, wrote The Specials' biography and runs their fan site) and their poignant track "The Girl Inside" is about loving someone who's struggling with addiction and other demons, and the heartbreak of not being able to fix it for them: "I pray for your strength to find/The hell that you go through...The girl inside has no idea/Of why she keeps holding on to her fears/You're so far away from me/But come what may/I'll love you 'till my dying day." Hopefully, we'll see more of these kind of singles from Abbey Productions in the future!

Fantastic review..already very familiar with the brilliant Skapones The Detroit Riddim Crew were a surprise revelation..superb format to have two bands on the one disc.well done Abbey Productions..hope there's plenty more to come..