Off Topic: Save Pluto 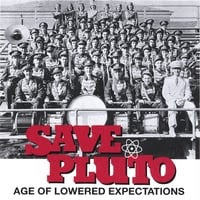 Over the weekend, a good friend invited me to tag along to see Save Pluto, a fantastic power-pop band from Staten Island that happened to be playing in my neighborhood. They describe their sound as a mix of Fountains of Wayne, Matthew Sweet, and Cheap Trick--but at their show, I was pleasantly surprised to also hear the Undertones, the Jam, Plimsouls, Buzzcocks, even Sugar lurking in their guitars and voices.

The gig was in the basement of this sports bar a block south of where that construction crane collapsed (it was kind of surreal: First Avenue was closed to traffic, fire trucks and firemen were everywhere--I guess in case of further disaster while they dismantled the crane and checked out the damaged building). Save Pluto's set was blisteringly good: the band was incredibly tight; the performances were frenzied, yet pitch-perfect; the songs were crammed with juicy hooks and soaring harmonies, and (perhaps best of all) they looked like they were having one hell of good time on stage (something you definitely can't say about a lot of bands--including the speed metal band that followed them). Lead singer Shawn Moynihan has a wicked ear-to-ear smile that puts The Joker to shame that he kept sporting throughout the set. Good times, my friends.

I bought a copy of their CD, Age of Lowered Expectations, after their show and have been listening to it practically non-stop ever since (and even when I'm disconnected from my iPod, some of the songs continue to run through my head...thanks, guys). One of the tracks that seems to resonate with me right now is "Red Letter Day." Much like the Talking Heads' "Once in a Lifetime," it's about finding oneself agonizingly adrift in middle-age and wondering how to go about setting things right again. Lyrics like this speak volumes to me (cause I'm old like them, dammit):

I want to feel it like I did back then
I want to live it like I know I can
Oooo, I need a red letter day...

The words make it sound like a bleak song, but the music is actually doggedly triumphant--gonna kick this thing in the ass somehow, soon.

So go to their MySpace page, check out some of their tunes, and go buy their album from CDBaby. Hear me, now?
Posted by Steve from Moon at 10:41 PM

Email ThisBlogThis!Share to TwitterShare to FacebookShare to Pinterest
Labels: Duff Thoughts, Off Topic

Awesome post. I am a huge Save Pluto fan and have been following them over the years. Great power-pop sound. I caught this show too and it didn't disappoint.

Glad you liked it. These guys are pretty amazing and deserve a massive following. Can't wait to see the band again...