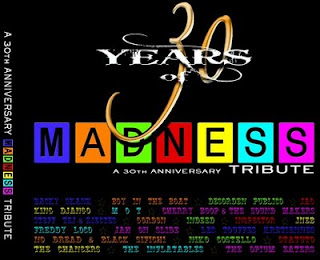 Conceived by Jerome Lanvin of Big 8 Records and executed by Jean-Pierre Boutellier and his fellow Madness fans in the French MIS (Madness Information Service) as a means to honor the Nutty Boys three decades after the release of their first single in 1979 ("The Prince" b/w "Madness," of course), 30 Years of Madness: A 30th Anniversary Madness Tribute is a terrific celebration of this ska/pop phenomenon. As with any tribute or cover album, the challenge is for the bands to negotiate the right balance between staying true to a song's essence (and not violating the listener's overall familiarity and affection for it), while bringing something new, worthwhile, and compelling to their interpretation. Overall, the majority of the 23 bands on 30 Years of Madness have been able to achieve this--the quality control is fairly high--giving Madness fans a lot to like here.

Even though the quotient of ska dropped significantly with each subsequent album after Madness' superb debut--and most of their hits were out-and-out pop songs--it is gratifying to discover how many of the acts on 30 Years of Madness have reverse-engineered the pop hits into ska tunes (see Gordon's "Michael Caine" or Desorden Publico's "It Must Be Love" among others). In doing so, it's like they've reclaimed Madness for the ska scene--which seems appropriate, since the ska faithful never deserted the band.

From this album, it's also clear that, despite Madness' determined Anglo-centrism (which never played well in the US, with the great exception, of course, of "Our House"), the group's influence extended far beyond the British Empire: on this comp, acts from non-English speaking world (Venezuela, Mexico, Spain, Italy, Belgium, Sweden, and the Czech Republic) vastly outnumber the few from the UK, US, and New Zealand (some of this may be due to the fact that the French MIS put this together; there are a ton of French acts represented; and a French label released it--and you know what? Vive le France, baby!).

Standout tracks on 30 Years of Madness include Steff Tej & Ejectes' "The Prince"; Inspector's rambunctious ska take on "Our House"; Indeed's gorgeously fragile "The Sun and the Rain," with its sweet female vocals; Desorden Publico's incredible Latin-goes-ska take on "It Must Be Love," turning a rather syrupy love song into a sexy romp; Statuto's Italian version of "Johnny the Horse"; Freddy Loco featuring Rocksteady Freddie from NY Ska Jazz Ensemble on a swinging vintage ska version of "The Return of The Los Palmas 7"; Gordon's urgently pleading "Michael Caine"; Cherry Boop & The Sound Makers' "Cardiac Arrest," whose female singer's seemingly helium-fueled voice is almost ethereal; and the simply awesome Lower East Side of Manhattan klezmer ska of "Nakht Shifi Ken Kayro," sung in Yiddish by King Django, but instantly recognizable as "Night Boat to Cairo."

There are a few covers that don't work as well as some of the aforementioned cuts, but when we are dealing with a catalogue as cherished as Madness', maybe it's just too hard to be objective when the originals are close to perfection and the versions seem just a bit off the mark (to me, you may love them--we're in very subjective territory here). And then there are some tracks that I wish had been covered here, like "Land of Hope and Glory" or "House of Fun" or "Driving in My Car." Yet these are mere quibbles with a tribute album that deserves a prominent place in the Madness-related canon.

Perhaps the critical comment that should carry the most weight regarding 30 Years of Madness is that, according to JP, Madness have heard this compilation and love it! Chris Foreman, Madness' guitarist, has told the French MIS that, "The tribute album is overall quite brilliant and very touching to me."

The Duff Guide to Ska Grade: A+ (for effort)/B+ (the results)

(30 Years of Madness is available through Amazon France, but should be for sale through Stubborn Records and the offical Madness website soon.)
Posted by Steve from Moon at 8:03 AM

Excellent review and couldn't agree more. The range and depth and diversity of some of the covers have to be heard to be believed.

If you only buy one Tribute album this year, make damned sure it's this one!! :-)