Jerry Dammers In The Studio!

Well, not THAT In the Studio. Trojan Records reports that Jerry Dammers is working in the studio with the Trojan Sound System--we assume that he is producing some tracks. 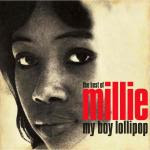 In related Trojan news, the label is preparing a Millie Small retrospective of her recordings for Island and Fontana Records:

Work on the eagerly anticipated ‘Best of Millie’ is nearing completion, with leading designer Tony Lyons putting the finishing touches to the CD artwork.

As previous announced, the collection is due out in mid-January and will feature 20 of the singer’s most sought after tracks from her 5 year spell with Island and Fontana Records in the mid-sixties.

The majority of the work featured appears on CD for the first time and is available on any format for thirty years or more. Highlights include her UK chart hits, ‘My Boy Lollipop’, ‘Sweet William’ and ‘Bloodshot Eyes’, while also of note are a wonderful version of ‘Hey Boy – Hey Girl’ featuring Jimmy Cliff, some sublime recordings arranged by Jamaican Jazz legend, Ernest Ranglin, and the previously unissued original backing track to the singer’s signature tune, replete with the original harmonica break, performed by British R&B hero, Jimmy Powell.

Trojan is seeking hi-res scans of the 7" and LP paper labels and sleeves of these releases, plus any other Millie Small-related memorabilia from this period. Contact the label at trojanwebsite@googlemail.com if you have something relevant in your collection. 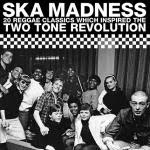 Perhaps inspired by the 2 Tone label site article "Under the Covers" highlighting all of the 60s-era ska and rocksteady songs that the 2 Tone bands covered, Trojan is also releasing Ska Madness:

To mark the 30th anniversary of the birth of 2 Tone, Trojan, in association with Spectrum, are releasing a collection of records that inspired the bands that led the Ska Revival.

Due out in November and entitled Ska Madness, the CD has been compiled and annotated by honorary Special and former Bodysnatcher Rhoda ‘The Boiler’ Dakar and is to feature 22 original cuts of songs later revived by the Specials, the Selecter, Madness, the Beat, the Bodysnatchers and Bad Manners – making it by far the most authoritative collection of its kind.

The track-listing is as follows…

2. Long Shot Kick De Bucket – The Pioneers – Regularly performed live the Specials featured this on their UK Number 1 ‘Too Much Too Young’ EP.

4. Jackpot – The Pioneers – A staple of the Beat’s live shows, a cover was included on their debut LP ‘I Just Can’t Stop It’.

5. Carry Go Bring Come – Justin Hinds & the Dominoes – The Selecter covered this for the flip of their excellent ‘Missing Words’ single.

6. Skinhead Moonstomp – Symarip – Another Specials cover from the ‘Too Much Too Young’ EP.

8. Rough Rider – Lloydie & the Lowbites – Another live staple for the Beat and again featured on their debut LP.

9. Monkey Man – The Maytals – An early live favourite for the Specials, a version featured on their debut long play.

10. Liquidator – The Harry J. All Stars – Again the Specials included a live rendition of this on their 1980 ‘Too Much Too Young’ EP.

11. Too Experienced – Jackie Edwards – The Bodysnatchers covered this for their second 2 Tone single.

12. Enjoy Yourself – Guy Lombardo – The Specials featured a version of this on their second album ‘More Specials’.

13. 007 – Desmond Dekker & The Aces – A live version by the Bodysnatchers featured in the film 2 Tone movie ‘Dance Craze’.

15. Time Hard (aka Every Day) – The Pioneers – The Selecter’s debut album featured a version of this entitled ‘Everyday’.

16. Train To Skaville – The Ethiopians – The Selecter featured this on the flip of their UK top 40 single ‘The Whisper’.

17. Fattie Fattie – Clancy Eccles – Bad Manners featured a version of this on their ‘Ska ‘n’ B’ album.

22. Starvation – The Pioneers – A version of this became 2 Tone/reggae artists’ answer to the Band Aid charity single.

Also, the Bad Manners Rare and Fatty album referenced above was released on Moon Ska as sort of a follow-up to their amazing Heavy Petting--a record that would have been a smash had Buster ever made it over to tour (we tried...I was on the phone a lot with his manager...he was supposed to headline the 2nd New England Ska Festival in 1998 and then tour about the States, but he pulled out in the 11th hour for health reasons?).
Posted by Steve from Moon at 12:30 AM

that rare and fatty album was my introduction to Bad Manners, and to this day a lot of those songs are my favorite bad manners tunes.

They definitely did leave out a lot of classics on that comp, like Exodus, El Pussy Cat (woulda been cool if the original Mongo Santamaria version was on here) Youre Wondering Now, etc. but there are songs on their ive never heard the original versions of, so i'll buy it.

It's a compilation, "One Original Step Beyond" and it came out in '93. That is, if the newer Trojan Originals Box Set is sold out. Damn, everything is so easy now!


that Bad Manners CD is the tops