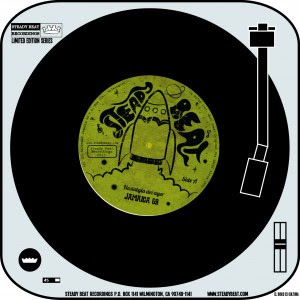 Luis P. Correa's great Steady Beat Recordings is back on the beat (read up a bit on the label's past here) with must have 7" vinyl singles from Mexico's amazing skinhead reggae devotees Jamaica 69 and LA's vintage ska masters The Delirians (a Duff Guide to Ska write-up of The Delirians' single can be found here).

While both of Jamaica 69's cuts on this single (sung in Spanish) have previously appeared in the US on their The Rough and Tough Anthology CD (2010, Shantytown Records), it's the first time they've been released on vinyl in the US--and they're sure to help spread the good word about Jamaica 69 even further amongst the Anglo ska crowd. While this reviewer has to fess up to having some significant deficits where the Spanish-language/Latin ska scene is concerned (for instance, the only other Mexican ska band I'm familiar with is the excellent Inspector--which, by the way, fans of The Toasters should really make a point to check out), the language barrier can pose some challenges--especially if what a band is singing about matters to you (using Google Translate more often than not creates some bizarre word salads rather than coherent lyrics). But once the music kicks in, all the language barriers melt away. Ska, rocksteady, and reggae are the same no matter what tongue the lyrics are in...

Both tracks on Jamaica 69's single--covers of sixties soul tunes--are surprisingly raw and tender skinhead reggae love songs. "Nostalgia del ayer" ("Nostalgia for Yesterday") was originally recorded by The Royalettes in 1965 as "Gonna Take a Miracle" (Ken Boothe also recorded a boss rendition of it) and the Jamaica 69 version is about a friend who became a lover "that showed me love every time you shine." "Una lagrima por ti" ("A Tear for You") is a terrific early reggae reading of Brenda Holloway's 1967 Motown hit single "You've Made Me So Very Happy" (notably covered by Alton Ellis) with new lyrics about a lost love: "I will never forget the way you kiss/You made me so happy and now it is enough to mourn" (just please try to obliterate from your mind the bombastic, white bread 1969 cover by Blood, Sweat & Tears that's been a perennial staple of oldies radio and K-Tel/Time-Life collections!).

Good review man! Love the info on the tracks - need more stories like that.

Jamaica 69 was released on vinyl prior to the steady beat release.

Thanks for the info, Anonymous! I will fix the post to read that it is the first time that the tracks have appeared in the US on vinyl...