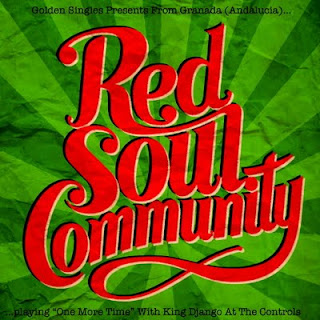 It was definitely an inspired idea to pair up two of the best ska-reggae-soul acts on the scene, Green Room Rockers (USA) and Red Soul Community (Andulasia), for a split single. But what's even more brilliant--and I'm not even sure this was intentional--is that one side is the answer song to the other; they're two sides of the same coin.

On "One More Time" (an alternate mix of an album track, nicely produced by King Django), Red Soul Community's Isabel Garcia sings about the difficulty of ending a romantic relationship ("One more time/I gotta say goodbye/but for the first time/leaving is too hard"). Even though she knows this is something she's gotta to do, she unexpectedly finds herself adrift: "I'm a tourist everywhere I go." This newfound emotional freedom leaves her without bearings.

A gorgeous voice like Garcia's would haunt any man (or woman, no judgment here!). This kind of major loss (fueled by regret and recriminations) would provoke someone like Mark Cooper of Green Room Rockers to respond with a fabulously aching cover of Etta James' "I'd Rather Go Blind" ("...than to see you walk away from me"). We'd go with this choice, too.

Duff Guide to Ska Grade: A
Posted by Steve from Moon at 1:30 AM