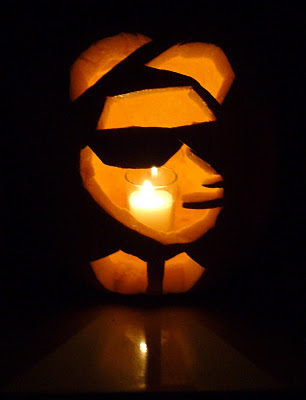 Thanks to Duff Guide to Ska reader Miles for sending in this picture of the Walt Jabsco jack-o-lantern that he recently carved. (He noted that next year he might tackle either The Toasters' This Gun for Hire or the Dub 56 album cover--which I'd definitely like to see.)

To put yourself in the mood (or to create one hell of a All Hallow's Eve party soundtrack), check out Hoi Polloi Skazine's prodigious list (300+) of ska/reggae Halloween-themed songs here.

For what it's worth, several of my favorite ska Halloween tracks can be found on RiceRokit's Hang Loose album--"Dull Boy" is from Jack Nicholson's character's crazed and murderous point of view in Stanley Kubrick's movie version of Stephen King's "The Shining"; "Something Wicked" references Ray Bradbury's intensely creepy novel "Something Wicked this Way Comes," which is about an evil carnival that comes to town; and "Howl at the Moon" has the singer warning you to "run for your life" before he sinks his werewolf teeth into your neck (sample the tracks here). RiceRokit also recorded an incredible cover of Bauhaus' goth masterpiece "Bela Lugosi's Dead" that, unfortunately, I don't think will ever see the light of day (but really does deserve to be exhumed from its crypt).

Email ThisBlogThis!Share to TwitterShare to FacebookShare to Pinterest
Labels: Forest Hillbillies, King Hammond, Skavoovie and the Epitones, The Soulsteppers, The Specials, The Toasters