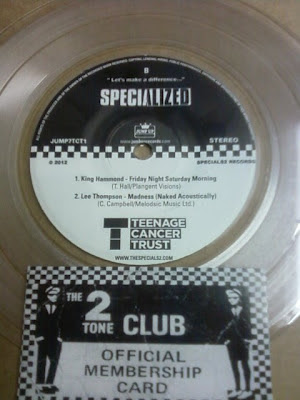 This terrific four-track EP features several cuts from the recent Specialized: A Modern Take on Specials Classics charity CD whose proceeds directly support the good work of the Teenage Cancer Trust in the UK. (For more background on this album, read this interview we did with Paul "Willo" Williams last December.)

The Specialized EP kicks off with a fantastic cover of Andy & Joey's "You're Wondering Now" by The Values featuring Roland Gift (I can't tell you how good it is to hear his voice again after all these years--he's been sorely missed on the music scene!) Roland's mournful tenor (one of the wonderful things about his unique voice is that it sounds like he's singing using whatever the vocal equivalent of a horn mute would be) is the perfect counterpoint to the band's upbeat interpretation of this track (which, for The Specials, was their parting shot on their first album at Margaret Thatcher, the National Front, and all the other haters of a socially/economically just and multicultural society: "You're wondering how you will pay for the way you did behave...").

The Jerry Dammers/Lynval Golding anti-racist/anti-violence song "Doesn't Make it Alright" (one of my faves) receives a spirited and muscular reading from Orange Street (best lyric: "Some people think they're really clever/To smash your head against the wall/They they say, 'you got it my way'/They really think they know it all"). Good stuff.

King Hammond's (and the Rude Boy Mafia's) bright, cheery take on the Terry Hall penned "Friday Night, Saturday Morning" is from the viewpoint of someone who's a couple of decades removed from the depressed and monotonous No Future of the UK in 1981. Life has turned out okay--the days of No Future have passed--and going out for a night on the town is actually satisfying and fun, as it should be (and perhaps they're enjoyed/treasured all the more with the knowledge that they're more days of the calendar behind one than ahead). Not only can your hear this sea change in the music, check out The Specials' lyrics against King Hammond's revised ones:

But what's great is that the singer's lament, whether from the vantage point of someone in their early twenties or just hitting the half century mark, is that the night oftentimes ends the same: "Wish I had lipstick on my shirt/Instead of piss stains on my shoes..."

Madness' Lee Thompson cheats a bit by opting for Prince Buster's classic tune "Madness" (of course, what else could he do?). But instead of the expected rollicking music hall stomper, this is the "Naked Acoustically" version--really a lounge lizard/dubby take on the song, with Lee half singing/speaking the vocals with percussion, a bit of piano/organ, and sax. The setting could be a rundown nightclub at closing time or the rubber room at an insane asylum, but either way it works!