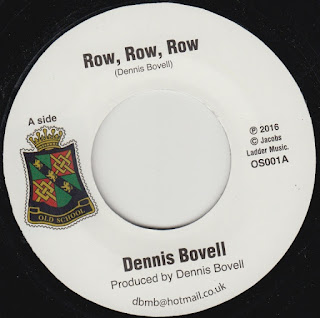 While most of these re-releases have been digital-only (and with the caliber of his work, we'll take whatever we can get!), Bovell has started issuing what may be the first of many more tracks on vinyl through his own Old School label. The extraordinary roots reggae song "Row, Row, Row" originally saw light of day back in 1978 as the Dennis Matumbi "Rolling Down the River" 12" single on the Serious Business imprint. This is the first time this track has appeared on 7" vinyl (it also can be found as "Rowing" on the insanely good Decibel: More Cuts and Dubs, 1976-1983 compilation) and I believe this is the first appearance of "Rowing Dub."

The wonderfully hypnotic, persistent, and seemingly unending bass line that "Row, Row, Row" is built around mirrors the (hopefully) long, unwritten journey for meaning and purpose in one's life that is alluded to in the lyrics: "Row, row, row/Rowing down the river/My god, I'm step, step, step, stepping/Out into the sea/I was born by a river/And just like that river/I got to keep on moving on/Keep on moving on/I ain't got nobody/Who I can call my own/I guess I've been moving/Ever since the day I was born...I rowed by a mountain/One fine day/I asked a wise man/To show me the way/He said, "Row on your boat/And look for yourself/Then come back to tell me/What you have learned..."" The equally terrific "River Dub" is a remix of the dub portion of the Decibel version of "Rowing."

Let's hope that Bovell has plans to release more vinyl gems like this from his vault very soon...