Duff Review: NST and The Soul Sauce: "Heaven Is Here/Song for Rico" EP 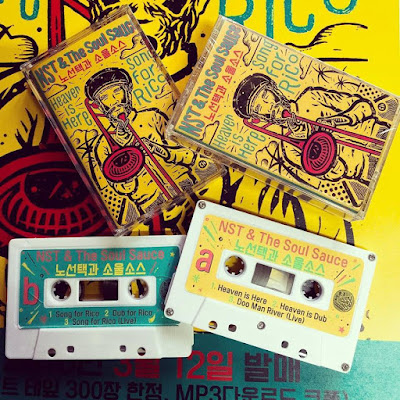 Originally formed as a session band comprised of members of other South Korean ska and reggae bands (such as Kingston Rudieska) for bassist and singer Noh Seon Teck's solo project, all of the musicians involved in what would become NST and The Soul Sauce quickly realized that they had a very good thing going. So, they decided to make a go of it and made it legit.

The sensational results of their efforts are presented in the digital EP and cassette Heaven Is Here/Song for Rico, which is built around the two title tracks--followed by their dubs, and then two live tracks (and the hidden, bonus cut "Highway Ram Jam"). According to the liner notes, the warm and vibrant title songs were expertly recorded live in the studio in one take, without overdubs and other studio wizardry (which was judiciously saved for the dub versions).

"Heaven Is Here" is a soothing, almost lullaby-ish roots reggae cut with verses in Korean and an uplifting, take-the-time-to-appreciate-all-that-we-have chorus in English: "Heaven is on this earth/Heaven is in our world." Its underwater dub version, "Heaven Is Dub," is true to its name and includes a fantastic sax solo that may remind one of Saxa from The Beat. The funk workout "Doo Man River" is a cover of an old Korean pop song that was recorded at one of NST and The Soul Sauce's gigs, and it shows off their considerable live chops.

As expected, "Song for Rico" is a horn-driven, Skatalites-like instrumental honoring the late and truly great Rico Rodriguez, where all of the brass players do solo improvisations and show off their mad skills. They do him very proud. The "Dub for Rico" is even better (mixed by their drummer, Kang Teck Hyun, who really knows what he's doing in deconstructing/reassembling this song) and is the highlight of the EP. The listener is then treated to a lovely, if not essential, live concert version of "Rico" (with audience members chatting in the front of the mix), which is subtly different from its studio version.


Lastly, the organ-powered bonus cut "Highway Ram Jam" is a recording of one of NST and The Soul Sauces' rehearsals (would that all bands always sound this good during practice!) and midway into the song, it shifts to include a good portion of Jackie Mittoo's sublime "Ram Jam." A violin solo in this section is a bit surprising at first, but then you realize that it's the perfect choice to help convey the sensuous, aching longing or euphoric satisfaction--its interpretation probably depends on your mood--in Mittoo's composition.  (To me, "Ram Jam" sounds like what it feels like when you're in love--both unrequited and reciprocated.)

Now that I'm collecting ska tapes again, I just need to figure out how to get my hands on this amazing cassette...

Thanks for posting this. Nice sounds. Also, I don't know if this place will post to the US, but here's a link to the label that put it out:http://www.easternstandardsounds.com/product/detail.html?product_no=380&cate_no=1&display_group=4. Also, it's available on iTunes.