Duff Review: The Soulsteppers "The Return of..." 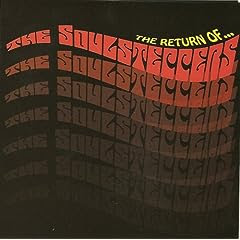 Editor's note: Jump Up just released a 10" vinyl version of this incredible gem of an album, so we thought it would be a service to The Duff Guide to Ska readers to re-post this review of "The Return of the Soulsteppers" that we ran a few years ago...

A fairly recent album by a band in this category (that seemed to slip under the radar) is Return of the Soulsteppers by Bakersfield, California's The Soulsteppers, who are remarkably similar in sound and quality to the cream of the skinhead reggae crop: The Upsetters, Laurel Aitken, Harry J All Stars, Dave Barker and Ansell Collins, Clancy Eccles, Lloyd Charmers, Symarip, and The Pioneers, among others. After first listening to The Return of the Soulsteppers, I was also reminded of the two King Hammond records that Bad Manners' Nicky Welsh lovingly created (if, at times, a bit tongue in cheek), Revolution 70 and Blow Your Mind, in the late 80s/early 90s (the story goes that when the debut King Hammond album was released, they actually passed some of them off to unsuspecting record store owners as a long-lost skinhead reggae classic--it's that good). Indeed, The Soulsteppers are in good company.