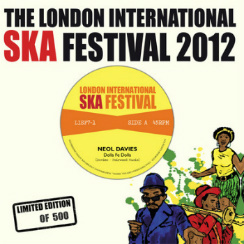 These two limited edition singles were released by the organizers of the 2012 London International Ska Festival (led by a certain ska musician/fanatic by the name of Sean Flowerdew) to help promote/commemorate this event, as well as celebrate several of the headlining artists who performed earlier this year. If you couldn't have been there (like poor old me!), they're at least a taste of all the ska and reggae goodness there was to be had...

Single 1: Neol Davies "Dolla Fe Dolla" b/w The Dualers "Nothing Takes the Place of You"

While Pauline Black will forever be known as the extraordinary voice of The Selecter (and is currently helming her own version of the band), Neol Davies, as all good students of 2 Tone know, is the songwriter (and guitarist) behind such fantastic Selecter cuts as "The Selecter," "Three Minute Hero," "Street Feeling,""Missing Words," "Too Much Pressure," "On My Radio," "Celebrate the Bullet," and more. Davies proves himself once again to be an ace ska composer with the hard-hitting and extremely (or it is eternally) topical anti-greed/corruption salvo "Dolla Fe Dolla": "You try and ask your MP/Where's all the security?/He's banking it all offshore/and he's coming right back for more...Another catastrophe/they want to blame it on you me/So long before things could change/You'd better stay out of range!" Essential listening (with a great, immediately identifiable Selecterized guitar bridge) for the people expected to pick up the tab for/suffer the consequences of the big banks' outrageously risky and often rigged--see Libor--schemes (and the politicians failure to uphold laws/adequately regulate the financial system). And a damned good ska song, to boot. I want much more of this, Mr. Davies (please!).

The Dualers' thoroughly heartfelt/melancholy cover of Prince Buster's cover of Toussaint McCall's 1967 hit soul ballad "Nothing Takes the Place of You" (from their fine Prince Buster Shakedown album--read The Duff Guide to Ska review here) is a spot-on tribute to The Prince--and if you get a chance to compare Buster's cover to the original recording, you'll find that PB's arrangement of the song is vastly superior to the source material.

Dave Barker and the Phoenix City All-Stars' sweet vintage ska version of The Shirelles' pre-coital 1960 R&B hit "Will You Still Love Me Tomorrow" (penned by Gerry Goffin and Carole King) seems to have been transported straight from 1964 Kingston, JA. Even more striking is the Phoenix City All-Stars' version of Neol Davies' foundational cut "The Selecter," which was kind of a shock at first listen. I fully expected to hear an approximation of the hot summery insect buzz of the percussion, the crisp ska rhythm guitar, and then the lazy and haunting trombone line. Instead, one is hit with a very brisk, old-school Skatalites rendition of this track. Then you're immediately cognizant of the fact that it's a brave and brilliant re-imagining of a song that is deeply entrenched in the minds and beloved in the hearts of countless 2 Tone ska fans--and to not pull off a radical versioning of the song would have been disastrous (it should be very interesting to hear the other 2 Tone tracks that are re-created as 60s ska cuts on their upcoming Two Tone Gone Ska album).
Posted by Steve from Moon at 3:34 PM