The Toasters "House of Soul" Update/July Tour of the UK 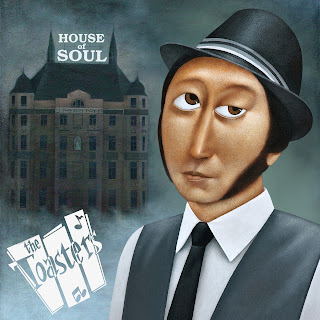 For some time now, fans of The Toasters have been eagerly awaiting the band's new single, which has been delayed, no doubt, by their almost non-stop touring schedule. So, I'm thrilled to report that The Toasters stellar "House of Soul" b/w the equally excellent "Going Home" will finally be released this fall, in time for the band's next batch of USA dates.

The "House of Soul" single (with picture sleeve by Serbian painter/Toasters fan Slavko Krunic) will be pressed on see-through green or blue vinyl (just like the old Moon 7" singles) and is the first 45" from The Toasters next album, tentatively titled Life is a Party. (Buck says he's going to be reverting to a sixties model: releasing a series of singles over time, which will then be compiled with some extra cuts to form an album proper.)

Buck was kind enough to let me preview the rough mixes of these tracks -- and they both have that classic Toasters Dub 56/Hard Band for Dead-era sound and vibe. In short, this single is going to be big and the next album is sure to be a winner. (Truth be told, I'm jonesing for a new Toasters record--remember the golden years when the band would release an album every 12 months?)

The "House of Soul" single features the following personnel:

The Toasters are gearing up for a "Far East" tour of Australia, China, Singapore, Malaysia, Thailand, Indonesia, and (hopefully) Japan. (If I didn't have a job, family, and responsibilities, I'd volunteer as a roadie!)

But first The Toasters are playing some dates in the UK this July:

Email ThisBlogThis!Share to TwitterShare to FacebookShare to Pinterest
Labels: Bucket, The Toasters

Can't wait for the release. Will definitely keep reading for future updates.

The Toasters are hands down my favorite ska band, and it was through a google search on all thing Toasters that I found this site (been a fan ever since).

I plan on doing a set of retrospective videos for all their studio albums as my next big undertaking.