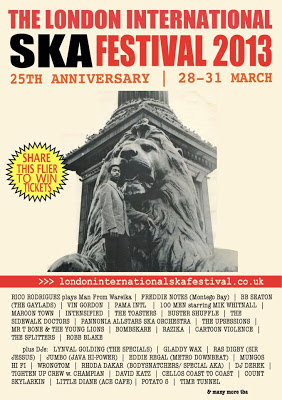 Here's the AMAZING schedule. Much more is still to be added, so be on the lookout for updates. Make your way to London this March if you can!

From its birth in Jamaica, ska has come a long way, morphing and inspiring every generation and reaching all corners of the world. The festival will once again showcase all that ska has to offer--from its roots in rhythm and blues, mento and calypso, to the Jamaican originators, the progression through rocksteady and reggae, 2 Tone, ska-punk and right up-to-date with 21st century ska sounds.

For uptodate info and tickets go to: www.londoninternationalskafestival.co.uk