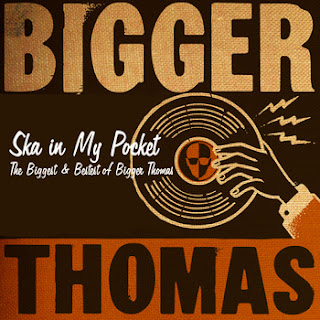 Starting out at Rutgers University in New Jersey in the late 1980s as Panic (after The Smiths song of the same name), but forced to rechristen themselves (after the protagonist in Richard Wright's novel "Native Son") when a cover band with the same moniker sent them a "cease and desist" letter, Bigger Thomas are now celebrating 25 years of making ska music in 2013. Thankfully, they're not showing sign of shifting into a lower gears any time in the foreseeable future.

Bigger Thomas is marking this significant benchmark--three founding members are still in the band: Roger Apollon, Marc Wasserman, and Jim Cooper--with a new, spectacular 21-track digital compilation released this past Martin Luther King, Jr. Day (also the second Inauguration of President Barack Obama) called Ska in My Pocket: The Biggest and Bestest of Bigger Thomas (available on Bandcamp for $7.00), which features key cuts from all four of their albums: Bigger Thomas (1989), Resisting Success (2004), We Wear the Mask (2005), and Steal My Sound (2010).  Fans of 2 Tone (BT are heavily influenced by The English Beat in particular) and of the post-2 Tone NYC ska sound (best represented on NYC Ska Live compilation, which included two Bigger Thomas tracks) will have an instant affinity (love, really) for the band's fantastically upbeat and catchy songs (see "I Live at Home," "Fun," "Chucks" "I Can't Remember My Name," "Kings of the Club," "Moving," "Radics and Roger A Chat," their early hit "Ska in My Pocket," and many more).

As for new recorded tunes on the horizon, Bigger Thomas are in the process of putting together an EP's worth of songs (with Agent Jay of The Slackers, Reggay Lords, Crazy Baldhead mixing/producing), as well as a cover of The English Beat's "Sole Salvation" for the forthcoming Specialized 2: Beat Teenage Cancer CD that will benefit the Teenage Cancer Trust in the UK.

Bigger Thomas have also been gigging as of late, with recent shows in New Jersey and Pennsylvania (with The English Beat)--plus upcoming performances this week at the Studio at Webster Hall in Manhattan on Thursday (1/31/13) and the Court Tavern in New Brunswick, NJ with Inspecter 7 on Saturday (2/2/13). Rumor has it that there will be a giant Bigger Thomas 25th anniversary show sometime later this spring or summer. Make sure to catch the band in action. I've seen them many times and they've never failed to get an old ska fan like me dancing for most of their set (when I'm not videotaping parts of their performance, that is!)...