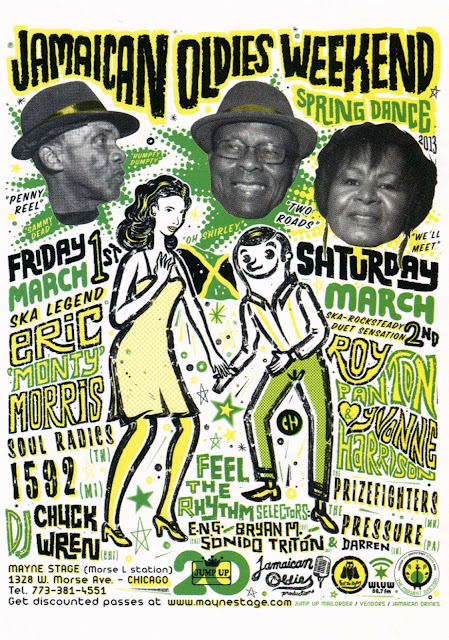 Jump Up Records celebrates the beginning of its 20th Anniversary by creating Jamaican Oldies Productions, a partnership with Mayne Stage to bring vintage Jamaican vocalists to Chicago every three months!

Following on the heels of the smash first Jamaican Oldies Weekend (with Pat Kelly and Stranger Cole) in November, comes the second edition with Eric "Monty" Morris backed by the Soul Radics (and Detroit's finest rocksteady crew 1592 opening) on Day One (Friday, March 1st), and Roy Panton and Yvonne Harrison backed by The Prizefighters (and Pittsburgh's The Pressure opening) on Day Two (Saturday, March 2nd). Limited discount two-day passes are available here.

(From the Jump Up Facebook Event page:) Eric "Monty" Morris is considered to be one of the foundational artists of Jamaican ska, starting as the original vocalist for The Skatalites, later duetting with Derrick Morgan, Roy Panton, Patsy, and Prince Buster, and creating a prolific string of early 60s Jamaican chart hits, including "What A Man Doeth," "Money Can't Buy Life," "Into My Garden," "Enna Bella," "Humpty Dumpty," "Sammy Dead," "Solomon A Gundy," "Strongman Sampson," "Oil In My Lamp," and "Penny Reel."

Morris grew up in Kingston's Trench Town and like many singers of the 50s, he could be found at sound system dances and at talent contests including the famous "Vere Johns' Opportunity Hour." In 1961, he recorded a medley of nursery rhymes as "Humpty Dumpty," providing vocals to Drumbago Parks All-Star Band's shuffling beat. The song proved a phenomenal success and is regarded as pivotal in the progress of Jamaican music, introducing the emphasis on the half beat in comparison to earlier local recordings, which simply mirrored American R and B, creating something rhythmically unique: ska.

At the beginning of the Jamaican music industry, singers received a single fee for their studio performance, thus motivated singers like Morris recorded for anyone and everyone who would pay. He voiced for the best producers, including Prince Buster, Byron Lee, Sonia Pottinger, Vincent Edwards, Duke Reid, and Clancy Eccles, and repeatedly topped the Jamaican charts. But it was his massive Byron Lee hits "Sammy Dead Oh" and "Oil in My Lamp" that got him invited to perform at the 1964 New York World's Fair as part of a three-hour "Ska Spectacular" with an esteemed group of musicians that included Millie Small, Jimmy Cliff, Prince Buster, and Byron Lee and The Dragonaires.

Unfortunately, ska failed to capture the imagination of the American public at the time, and the "Wild West" mentality of the Jamaican music business left him short of the financial rewards gained by some of his peers. Even with late 60s productions by Clancy Eccles and Lee Scratch Perry under his belt, Morris did not survive the transition to rocksteady and reggae very well, retiring from the music business in 1970 when he emigrated to the United States.

Time heals all wounds, and since Morris' legend was still strong in the memories of the US Caribbean community, he was tempted back in 1988 to record for the Washington, DC Kibwe label. In 1999, Morris saw a triumphant return to Jamaica after three decades for the Heineken Star Time oldies concert series. Ten years later, Morris' son teamed up with singer/producer Sadiki to create The Living Legends Collection, his first-ever, full-length album bearing re-cuts of his original hits. In 2003, his song "Enna Bella" was used in the soundtrack of the Jim Jarmusch film "Coffee and Cigarettes," plus his songs appeared on many ska and reggae compilations issued during the 80s and 90s ska revival, including Ska Bonanza, Ska After Ska, More Intensified and the Byron Lee and Dragonaires Dynamite Ska collection.

To call Monty an overlooked name in Jamaican music history is truly an understatement; the man is still to receive the true recognition he is due. Jamaican Oldies Productions are extremely proud to present this living legend in Chicago, backed by the Soul Radics from Tennessee. Detroit rocksteady champs 1592 gets the night started right.

Ticket info: Tickets on sale soon via Manye Stage website: www.maynestage.com. Tickets are $25. This is an 18+ show. There will be a limited amount of two-day passes available for $40, so if you know you're coming for the weekend, snatch these up quick!

There will be a pre-party at Delilah's Chicago on Thursday, Feburary 28th. DJ Chuck Wren opens up his regular night (Chicago's longest-running ska/reggae monthly at 18 years) to an all star cast of in town and out of town DJs from 9:00 pm to 2:00 am.

(From the Jump Up Facebook Event page:) There were many popular Jamaican duos singing love ballads in early 60s: Stranger and Patsy, Keith and Enid, Alton and Eddie, Derrick and Patsy, Jackie Opel and Doreen Shaffer, and Lord Creator and Norma Fraser, just to name a few. But perhaps the greatest duettist of them all was Roy Panton, who started recording in the late 50s with Stranger Cole and Eric "Monty" Morris, duetted with a young Millie Small, and produced a plethora of ska/rocksteady recordings with Yvonne Harrison that rode high on the Jamaican charts during the early 1960s. These powerful recordings touched the hearts of many and drew much inspiration from the black American duo Shirley and Lee. Focusing mostly on themes of romance, many of these duet recordings acted as a springboard to catapult singers into successful solo careers.

Millie Small was one such atrist, who as a teen sang alongside Roy Panton at Clement Coxson Dodd's Studio One. Roy and Millie had a hit with "We’ll Meet," which stayed at #1 in the Jamaican charts for six weeks. The success of the duo's debut disc spurred Dodd to accelerate their output over the ensuing months, including "Never Say Goodbye," "There'll Come A Day," and "You're The Only One," among their most popular works from this period. Yet while Roy and Millie were fast becoming one of the island's leading acts, financial recompense from their recorded work remained meager, so in early in 1963 the pair switched to Lindon Pottinger's Gay Disc Records spawning the popular "Oh Shirley" and "Marie," the latter becoming one of the biggest-selling Jamaican singles of that summer. That same year Prince Buster produced "I'll Go" b/w "Over And Over" and as the disc climbed the national radio charts the fate of the island's popular duo were being determined elsewhere.

In 1963 Chris Blackwell brought Millie Small back to Britain, and the rest shall we say is history...

After Millie Small's worldwide smash "My Boy Lollipop," a plethora of albums featuring early Roy Panton duets were released seeking to exploit the young singer's sudden popularity: Millie and Blue Beat issued by Melodisc/Blue Beat, Millie and Her Boyfriends on Island/Trojan, and Ska At The Jamaica Playboy Club on Island.

Roy kept busy at this time cutting solo singles, but eventually teamed up with a new duet partner by the name of Yvonne Harrison, who was enjoying solo chart success at the time with "The Chase." As Roy and Yvonne, they had their first hit with "Two Roads Before You" and its flip side "Join Together, and they continued recording for several producers throughout the 60s, performed live with Byron Lee and The Dragonaires on the "All Island Tour," were featured on the first televised show in Jamaica at Kingston's Sombrero Club (which became part of the 1964 documentary "This Is Ska"), and recorded with Tommy McCook and The Supersonics.

Jamaican Oldies Productions and Jump Up Records are proud to present the official North American album release for Roy Panton and Yvonne Harrison's first ever anthology, Roy Panton and Yvonne  Harris with Friends, a collection of 17 rare studio recordings from 1960-1971. Released by Liquidator Music in Spain, these tracks have been cleaned and remastered for the first time, featuring songs performed both together and solo, including collaborations from Eric "Monty" Morris, Millie Small, Annette, and Glen Adams.

Roy and Yvonne will be backed by The Prizefighters from Minneapolis, who will perform a full set as well. They're welcomed back after doing such an incredible job with Stranger Cole last November!
Opening the night will be The Pressure, crucial vintage Jamaican rocksteady from Pittsburgh, PA.

Ticket info: Tickets on sale soon via Manye Stage website: www.maynestage.com. Tickets are $25. This is an 18+ show. There will be a limited amount of two-day passes available for $40, so if you know you're coming for the weekend, snatch these up quick!

There will be a pre-party at Delilah's Chicago on Thursday, Feburary 28th. DJ Chuck Wren opens up his regular night (Chicago's longest-running ska/reggae monthly at 18 years) to an all star cast of in town and out of town DJs from 9:00 pm to 2:00 am.
Posted by Steve from Moon at 6:14 PM