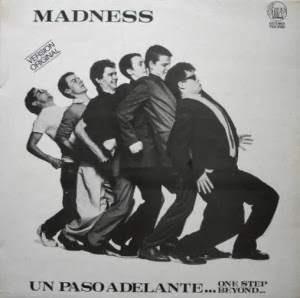 Here's another ska nugget that I unearthed in one of my recent lunchtime trips to a certain, unnamed used record shop near my workplace: the version of Madness' 1979 debut album One Step Beyond that Stiff Records released in Spain (as Un Paso Adelante; I'll let you figure out the translation), featuring Chas Smash's credible, Spanish-language spoken word intro to this classic Prince Buster cover. (I particularly love how in the album track listing on the back cover, it notes that "Un Paso Adelante" is the "Version Original"!)

Apart from the title track, everything else about the album is similar to the UK and US releases, but, obviously, this is a nice addition to any Madness or ska fan's collection (and since my 1980s-era domestic copy of this album is a bit tattered and torn, it's fantastic to have come across this practically mint copy--and for an extremely reasonable five bucks!).