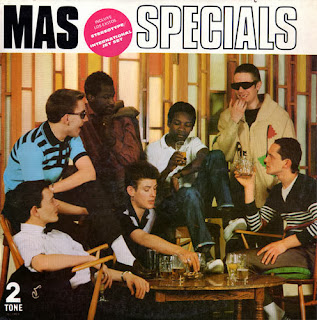 Over the summer, I came across The Specials' Mas Specials (the version of More Specials that Chrysalis released in Spain in 1980) while picking up a copy of the Spanish release of "Rat Race" b/w "Rude Boys Outa Jail" at a record shop in Greenwich Village that I had ordered through Discogs (it was near enough to walk to from work and I saved some cash on shipping). I had been so incredibly inspired by the recent Specials show in NYC this past July that I was in the process of tracking down the last few vinyl singles that I never had the opportunity to buy back in the 80s ("Gansters" b/w "The Selecter" and "A Message to You, Rudy" b/w "Nite Klub" were the other outstanding 45s).

Not knowing that this version of the album even existed--I half expected it to be a very good bootleg until I got home and confirmed its legitimacy via 2-tone.info--I bought it on the spot. While Mas Specials features the same cover photo as the US version, it sports the UK track list (meaning no appearance of "Rat Race") and the paper label is the standard UK Walt Jabsco, not the US version with him listening to a transistor radio. My copy of the US edition of More Specials (well, it's actually my brother's, but his ska-loving days are long finished), purchased in 1983 or so, has seen better days. So even though Mas Specials doesn't contain any alternate versions of tracks, it's in mint condition (and bought for less than most new LPs go for these days), so I'm more than happy to have it as part of my collection.