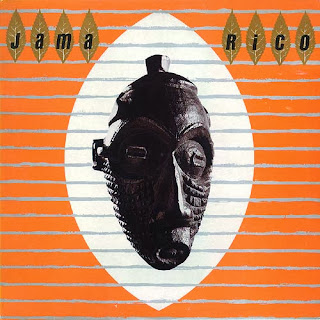 Last week during my lunch break, I made my weekly pilgrimage to a certain unnamed used record store about a 10-minute walk from my job and struck ska gold. Usually on these outings, I'm scouring the bins for New Wave and post-punk singles and albums that I didn't have the money to pick up--or didn't even know existed--back when I was in high school in the first half of the 1980s.

But on this day, the gods of vinyl were good to me. I snagged one of the rarest (at least, on this side of the pond) 2 Tone releases--a near mint copy of Rico Rodriguez's Jama Rico (1982), which is filled with mind-blowingly good vintage/authentic ska and reggae instrumental cuts. 2 Tone's parent label Chrysalis never opted to release this album in the US (and I wonder if any specialty shops here even bothered to import copies of it; in all my many years of digging through the crates, this is the first time I've ever seen it; and there is very little written about it, either on-line or in the reference books on ska and reggae in my bookshelves--even George Marshall's "The Two Tone Story" gives it short shrift). 2 Tone ska's flame-out in the UK, no doubt, had a lot to do with the album's scarcity and the dearth of info about it, but Rico and this brilliant album deserved much better.

Ska fans who love Rico and The Special AKA's "Jungle Music," will immediately take to the stunningly evocative ska and reggae of "We Want Peace," "Jam Rock," "Love and Justice," "Some Day," "Do the Reload" (which is a cover of Rico's dear friend and mentor Don Drummond's awesome "Green Island"), and "Easter Island" (written by Japanese saxophonist Sado Wattanobe)--all of which follow the expected song structures for this genre of music. Those open to more musical paths less traveled will enjoy the more jazzy, looser, experimental takes on Jamaican music on "Destroy Them," "Distant Drums" (with Rico on vibraphone and funda drums!), and "Java."

According to Paul "Willo" Williams in his fantastic biography of The Specials (and 2 Tone Records) "You're Wondering Now: The Specials from Conception to Reunion," notes that Rico's "Jungle Music" single and the Jama Rico album failed to gain any traction and climb the charts due to the rise of the New Romantics in the UK (Ultravox, Spandau Ballet, Duran Duran, etc.). It was all a matter of unfortunate pop-culture timing (one can't blame the material or performances, as they're brilliant); the UK record-buying public's massive infatuation with ska music was over by 1982.

While Chrysalis, to their great shame, has never released Jama Rico on CD (though "Easter Island" and "Destroy Them" are on The 2 Tone Story CD), I was shocked to discover that the album currently is available digitally through iTunes in the USA (how long has it been for sale there?)--as is what looks like the entire 2 Tone catalogue (even the late, non-ska releases on the label from The Higsons, Swinging Cats, JB's Allstars, The Friday Club, and The Apollinaires). Still, nothing beats having these warm, organic sounds captured on a vinyl LP in my very own collection. Whoever decided to part with Jama Rico (after taking such good care of it all these years) and sell it to my favorite used record store has my sincere and undying gratitude!

Great review. 2Tone really stands the test of time with all their release, including "Jama".